I'm trying to configure my Raspbian to support console output in my native language (Polish). After updating my locale preferences (I chose pl_PL.UTF-8 as my default locale), I ran a test - I typed some non-ASCII characters needed to represent strings in Polish, and saved them into a file:

It seems the default font doesn't support UTF-8, I guess... I downloaded the file and viewed it in a text editor on my Windows machine:

Well, that's exactly what I typed. But when I view the file via the SSH console (PuTTY), this is what I see:

How do I set a UTF-8-compatible font in the "physical" Raspbian console and how do I set up the SSH connection to display the characters properly?

EDIT: I should make it clear that the problem touches all the console output, not only text file contents. This is the lower part of nano's CLI interface:

And below are the correct spellings, taken from some other remote Ubuntu instance:

The same happens to any translated command line tool I run.

EDIT 2: Thanks to Steve Robillard, I set the remote character set in PuTTY to UTF-8, and now all the characters in my SSH console display properly. I didn't think it could be PuTTY's fault, because it was always working correctly with all the other machines I usually SSH into. I also thought the encoding is negotiated automatically... Wrong!

The problem with Raspberry's "physical" console (the one displayed on the screen connected directly via HDMI), however, still remains unsolved.

EDIT 3: Answeing HeatfanJohn's request, here is the output of locale -a: 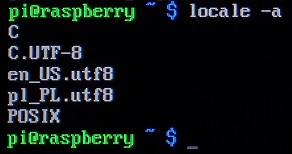 What does locale (without the -a) report (i.e. all the language specific variables and their current values)? I think you should ensure that you have done:

in your .bashrc I believe.

Not the answer you're looking for? Browse other questions tagged raspbian ssh locale or ask your own question.