On RetroPie is it possible to speed up the time needed to switch from an emulator back to emulationstation?

I'm using a Raspberry Pi with RetroPie and I'm quite happy with it; there's only one exception: when I choose a file to launch inside emulationstation, usually it only takes few moments to load the emulator and the file. BUT when I exit the emulator to go back to emulationstation it takes a lot of time. Really! Sometimes it takes up to 20-25 seconds to go back to the launcher.

I already tried to install RetroPie on a faster micro-sd card (I believe it's a class 10 card), but IMHO it's still really slow.

Please, could you tell me if there is anything I can do on the configuration to speed up this process ?

One thing you could do is overclock the Pi. This would increase overall speed, and should help with your issue.

I already tried to install RetroPie on a faster micro-sd card (I believe it's a class 10 card), but IMHO it's still really slow.

I don't believe having an faster SD card is going to help all that much, as this slowness is probably because the Pi is a relatively low-spec piece of hardware (as I'm sure you know.) The Pi simply can't process and load the data from the SD card for the application fast enough.

When you overclock you don't just speed up the CPU/GPU, you are also speeding up the RAM, which should help some. However, the issue still remains that the Pi is a low-end (speed-wise) device and it isn't/wasn't made to be a gaming device.

The prior answer is a bit out of date. On the Pi 2 and 3, SD card performance does matter quite a lot!

There is an order-of-magnitude difference between most cheap cards and the slightly-more-expensive ones (even if both are rated as being in the same class)—especially in small-block random I/O performance. As an example, if you use a normal, cheap microSD card for your database server, normal database operations can literally be 100x slower than if you used a standard microSD card. 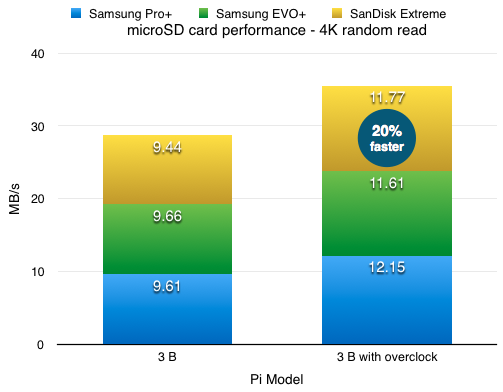 Try this alternative before switching to a faster SD card and/or overclocking yor pi:

(check the paths are correct in your system)

The idea is to keep the main executables of retroarch and emulationstation in main memory so switching betweeen them will be faster (no need to load the file back from the SD). You may also cache other files and emulators cores you use often.

Not the answer you're looking for? Browse other questions tagged retropie or ask your own question.

1
RetroPie - I can't see the NES emulator
1
Why is boot crashing on preliminary keymap with Retropie? (Pi Zero)
0
Missing RetroPie menu in EmulationStation when running from USB
0
Retropie installation from the raspberry pi 3 model B
0
How do I create a shortcut to EmulationStation/RetroPie from Raspbian?
0
How to run emulationstation and Node.js at the same time?
1
Is it possible to add a Bezel/Border to the screen saver mode on retropie?