I bought the Canakit, which comes with all the necessities:

As soon as I opened my kit, I immediately put the raspberry pi into the case that came with it. I then plugged it up to my HDTV, both power and HDMI. I installed the Raspberry Pi OS, checked things out; it is a working computer.

Next, I went to the internet for tutorials, because frankly I have no experience will electrical engineering, the most that I know is that there is a positive and a negative, and there is various jargon such as amps, volts, and watts that I do not understand.

I followed the tutorials to the T and still, I cannot for the life of me get any damned LED to light up! Nothing happens whatsoever no matter what I try.

I did, however, somehow manage to cause a short that restarted my Pi, but the Pi continues to function normally. What could have happened? Do I need a new breadboard, new interface board, new Pi?! I've been pulling my hair out just trying to get my feet wet in the electronics field.

Here is my setup, please excuse the image quality.

Note: the Pi is on and running the OS fine from when I took the picture. 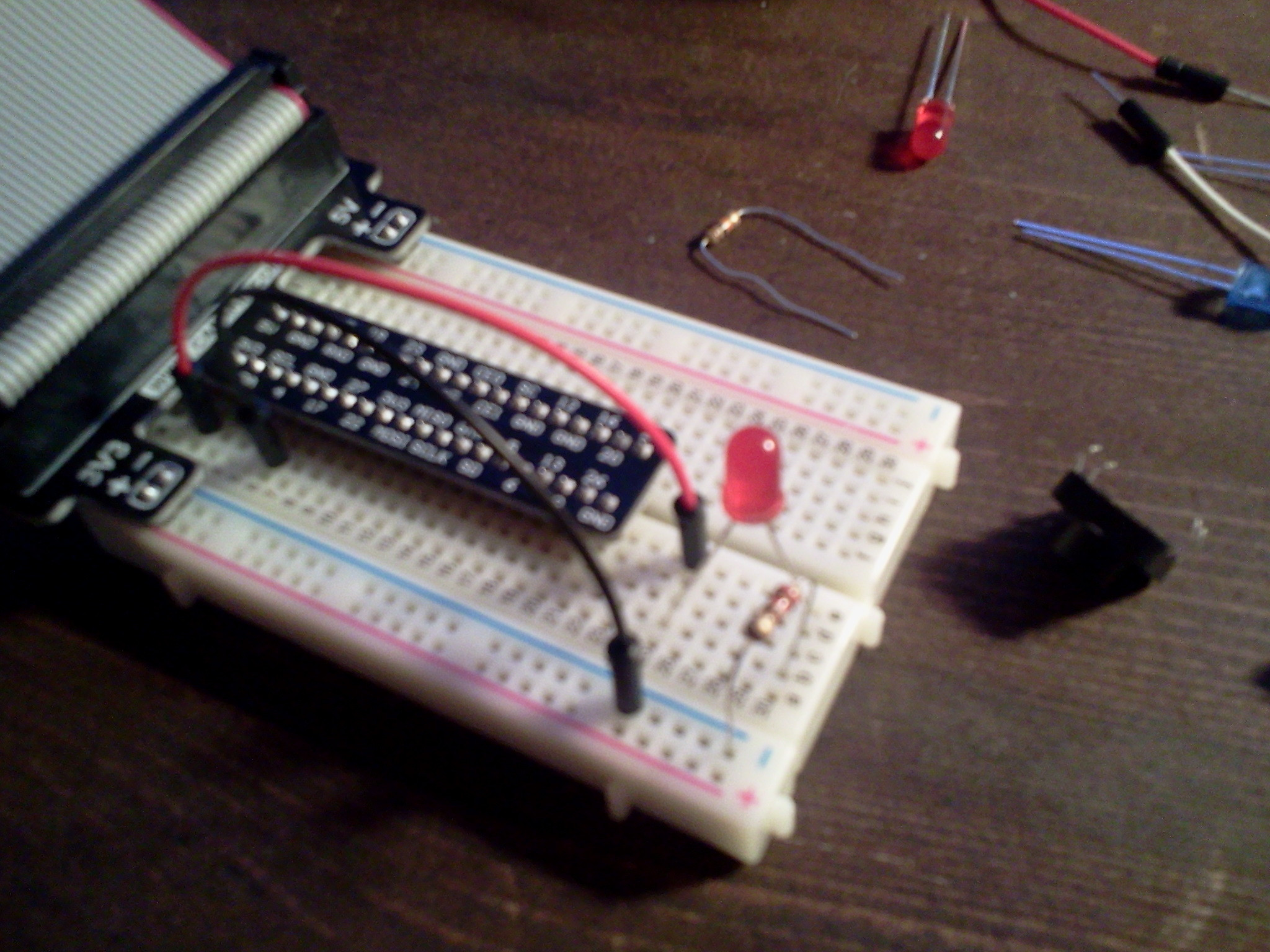 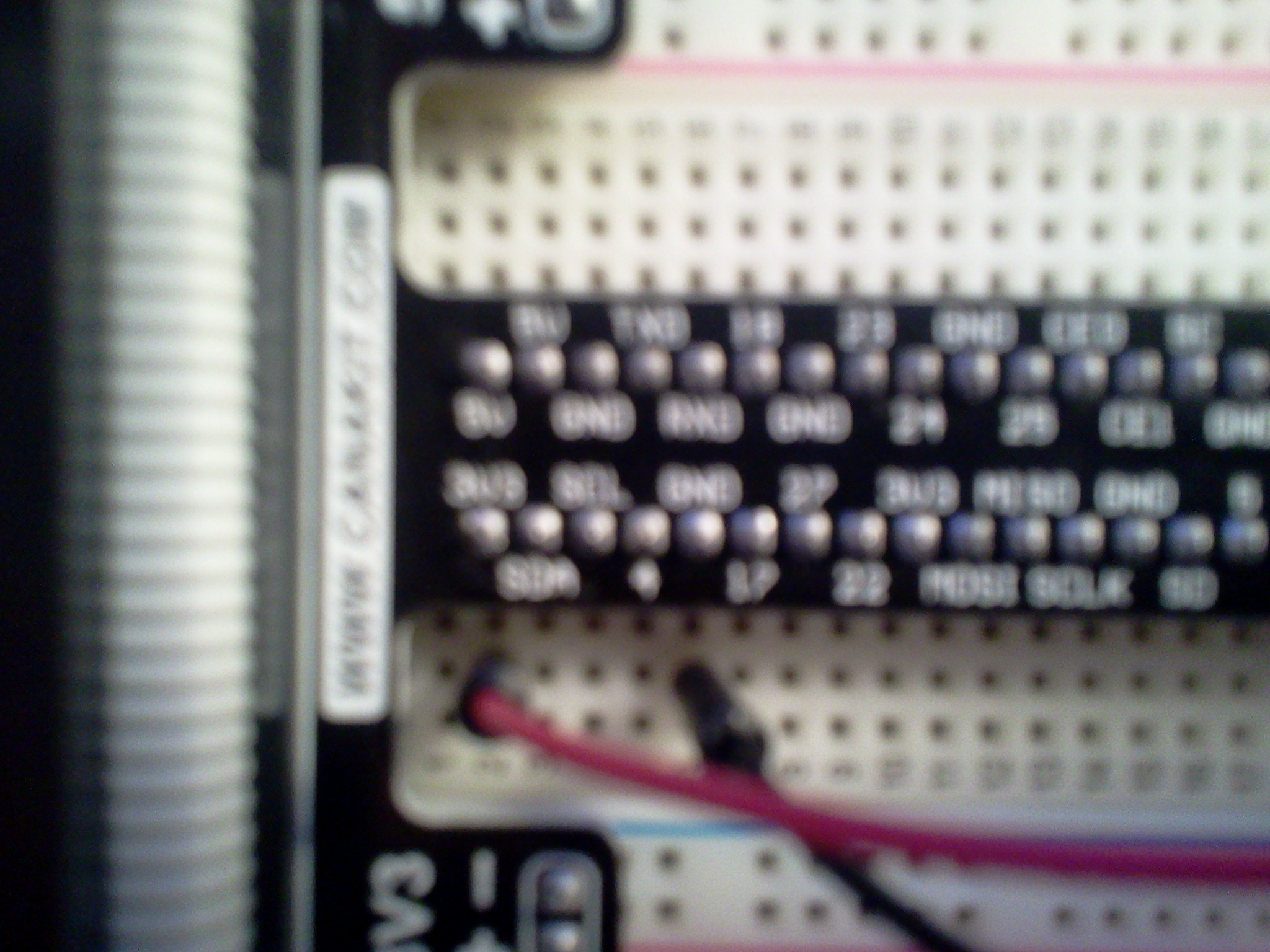 From where I plugged the other end of the black cable I have a resistor, of which I do not know the amperage, connected to the same rail as I have the negative side of the LED. The short end.

And I have the red cable going straight to the same rail as the positive part of the LED. This should work from what I have seen on the internet, but I can't seem to succeed.

Nothing I try works, but..

I am able to turn the PI off

if I connect the SC pin to a ground, the pi cold restarts. I know this is probably not good for the Pi, about the same as cold restarting your pc is.

But the fact that it does that tells me that the interface board actually works, or at least that one SC pin does.

Did I break something?

I was just searching through Google images and found this http://pi4j.com/images/gpio-control-example.png

I don't know why that it turned on this way though?

Because I had the ribbon cable plugged in backwards

If their diagram for the pins is correct, then this is my working setup

I guess the longer side is the ground, because that's what it is plugged to.

Again, I have the short side of the LED plugged into where the positive charge is.

Well, I somehow manage to screw it up. I had it lit up just fine. I actually managed to figure out that I only needed one wire, from Pin 11 to a resistor connecting to the short pin on the LED; and I plugged the long pin into the apparently already grounded 3.3V side of the board. I then got trigger happy and became curious as to which pins I get get power from.

As it turned out, I was only able to get actual power to the light from only pins 11 & 35.

I am not sure which pin I chose next, but it did a cold shutdown on my pi, it did not come back on. When I touched that same aforementioned pin again, it came back on.. as if I hit the power button.

But I could never get the LED to light up again!

I touched the wrong pin somehow and now I can't seem to do anything. If I hit that same aforementioned though, it will cut shut it down as well as turn it back on.

What in the world have I done?

0
I think I broke it, the GPIO

1
Are my GPIO ports not working?
0
GPIO pins: (3v3 and #pins) not providing power
0
I think I broke it, the GPIO
1
Pi2 won't start when connected to breadboard via ribbon cable and gpio-to-breadboard interface
0
using gpio for positive and neg outputs
3
Raspberry Pi B won't recognise DS18B20 sensor
2
Soldering question
0
GPIOs of Pi3 not working
1
How exactly do i make a LED Blink? I tried every possible result
0
Fan control GPIO settings