Can I use Raspberry pi as NAS with Raid 1 and encrypted file systems?

I am currently using a desktop computer as NAS where I have four hdd's which I have in Raid 1 using mdadm. These Raid 1-drives are encrypted using Ubuntu's default encryption (I think it is cryptsetup)

Does Raspberry Pi Model B+ have sufficient CPU and memory to handle both mdadm and encrypted hdds?

Does Raspberry Pi Model B+ have sufficient CPU and memory to handle both mdadm and encrypted hdds?

I'm not an expert on, or even a user of such things, but unless this places significant load on your desktop machine (e.g, runs one core at 25%+ all the time), then sure.

The pi has a single core, 700 Mhz processor. I don't think the I/O can happen fast enough to overwhelm it in this context, which brings up a point worth considering: The pi does not have SATA connectors, nor is is USB 3.0 equipped. So you will be limited to USB 2.0 speeds. Further, the ethernet is on the USB bus. In theory this doesn't matter since the max ethernet speed (100 Mbps) is less than half the maximum bus throughput (480 Mbps1).

I have a USB 3.0 harddrive attached to a B+ which I access via ethernet or wifi using ssh encryption, and the highest speed I can get reliably doing transfers is 3-4 MB/s (i.e., 24-32 Mbps). The drive itself is not encrypted. I don't know if the ssh encryption in the transfer adds any overhead.

1. Wikipedia says this is actually limited to 280 Mbps of data. I've never seen a USB 2.0 device work faster than that.

I expect this can be made to 'work' (you will need 4 x USB-SATA 'dongles'), however throughput will be hopelessly slow ...

The only 'good' thing you have going for you is that your drives are 'nix format = so 'native' Pi drivers - if they were NTFS you would be looking at even more overhard (and even less throughput) ... 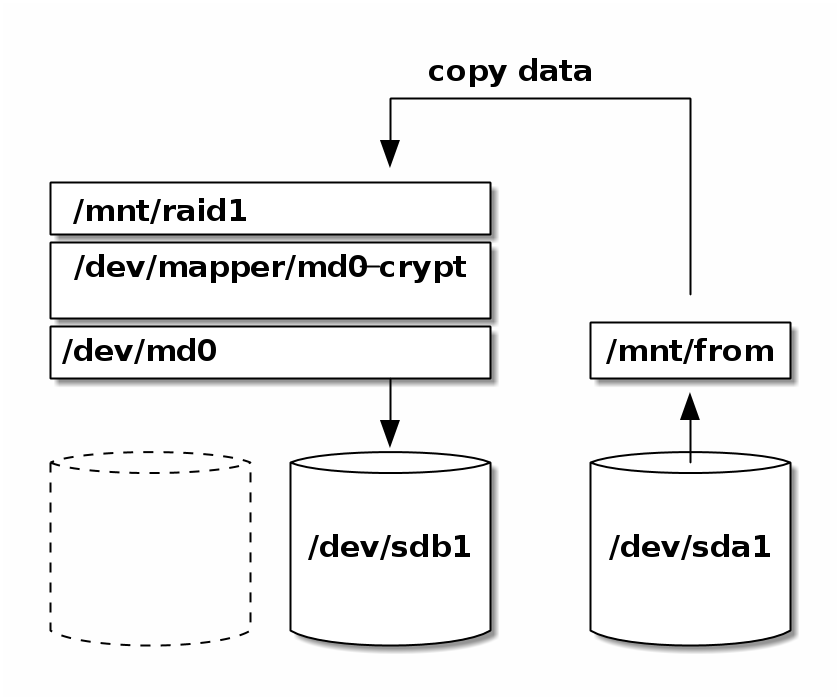 Not the answer you're looking for? Browse other questions tagged hard-drive filesystem benchmarking or ask your own question.

3
can I use a disk larger than 320 GB with RPi?
2
Is Raspberry Pi powerful enough for a VDR with a USB HDD and USB DVB-C stick?
2
How can I use a hard disk from Mac with ownCloud?
3
How to use the same hdd with raspbian and windows?
1
I am having an undervoltage issue with Raspberry Pi and a 2.5 HDD
0
Can I get both power and data from an external drive with an integrated USB hub?
1
Is it possible to use a mSATA SSD AND SATA HDD on the same Raspberry Pi 3 Model B+? (and/or a M.2 SATA)
0
Raspberry Pi with USB 3 (or 3.1) and enough power to use 2 drives
1
Problem with mariaDB, HSF+ and Raspbian on a Raspberry Pi 4