I know Fedora has ARMv7 images. Can those be used on the Raspberry Pi 2, and if so, how?

[There is now a Fedora aarch64 release for the Pi 3, and on the same page an armv7 for the 2/3. I'm leaving this answer as is though, since it can be applied to any generic GNU/Linux ARM distribution.]

Yep, Fedora 21 [and more recently, 23...27] works. However, the pi 2 still requires a special out-of-tree kernel, and you need the firmware and bootloader, so you should start with an existing pi 2 image; here I'm using raspbian (make sure it is a version subsequent to 1-31-2015). There's an alternative to ripping stuff from Raspbian, see the note about /opt/vc at bottom -- but using a Raspbian card at first is simpler.

The Xorg GUI server works using the fbdev driver, as it does on raspbian. The repo won't have pi specific things such as oxmplayer, but they can be compiled from source or connived out of Raspbian packages (for an example involving omxplayer see here). For raspicam, see the /opt/vc note.

You'll also have to do your own kernel and firmware updates. This is simple enough -- you just need the rpi-update script from the raspbian image (it's in /usr/bin and has no dependencies other than curl and the shell) or github. There is a slight potential complication with that, see step #6.

You'll probably at some point want something from what's in /opt/vc on Raspbian (and may be included other ways by other pi distros). This is actually from a github repo which includes the firmware and pre-compiled kernels, so if you clone the "firmware" part of that repo:

You get pretty much everything, including all the stuff for the first /boot partition, and the corresponding /lib/modules -- i.e., you could create the card completely from scratch using just this and the Fedora image, and update manually with git pull.

The /opt/vc directory of that repo contains some libraries and executables, including vcgencmd and raspivid, etc. /opt/vc/bin is in $PATH on Raspbian and you can do the same thing or copy what you want where ever. What's critical is that the libraries in /opt/vc/lib are found by the linker. If you copy /opt/vc directly to the pi, as root:

Otherwise the stuff in /opt/vc/bin won't work. The openGL ES libraries for hardware acceleration on the GPU are also in here.

You can install "Fedora 21 REMIX for Raspbery Pi 2B"

Since this question was answered, a version of Fedora 25 in a new state has been released for some Rasberry Pi models:

We currently only support the Raspberry Pi Model B versions 2 and 3.

Note that support is "very new":

Yes, instructions for someone with minimal Linux experience are at: https://chisight.wordpress.com/2015/10/19/fedora-22-or-23-on-raspberry-pi-2/

Fedberry is worth having a look at. It is based on Fedora 23. They provide images as download. The large one (~720 MB download) extracts to a 4.6 GB disk image including XFCE.

On Windows, I was able to uncompress the unusual .xz extension with the help of 7Zip. I then wrote it to the SD card using Win32DiskImager as I would do for Raspbian. Since the extracted file does not have the required .img extension, you have to enter * in the file open dialog to find it.

Like Raspbian it will resize the disk at first boot and ask for configuration when booted. 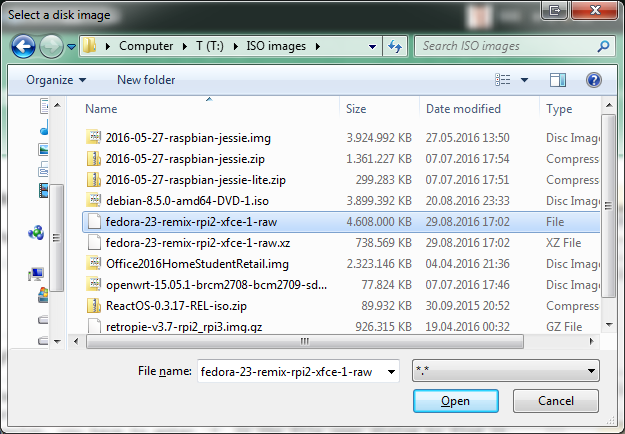 Try Fedberry Fedora remix. I'm currently using Fedberry and it works great. You can directly burn the image onto the sd card but using Pinn was easier for me.

Not the answer you're looking for? Browse other questions tagged pi-2 fedora or ask your own question.

1
Run Minecraft Pi on Fedora 21
2
Differene between Pidora and Fedora ARM?
5
How do I know if I'm on Debian, Ubuntu or Fedora?
1
How to install RealVNC on fedora arm 23?
1
Why can't fedora have support for raspberry but Debian does?
2
Cross compiling from Fedora 27
3
Fedora 29 on 3B - headless install
1
Backing up a CentOS/Fedora install, but it has 3 partitions
0
WiFi shows "unavailable" on Raspberry Pi 3 Model B / Fedora 32
1
How to expand the volume of Fedora 35 Server?