Ask Question
Asked 5 years, 2 months ago
Active 5 years, 1 month ago
Viewed 2k times
0
This question already has answers here:
How can I wire this SD card reader to RaspberryPi? (5 answers)
Closed 5 years ago.

I have this PCB SD card reader: 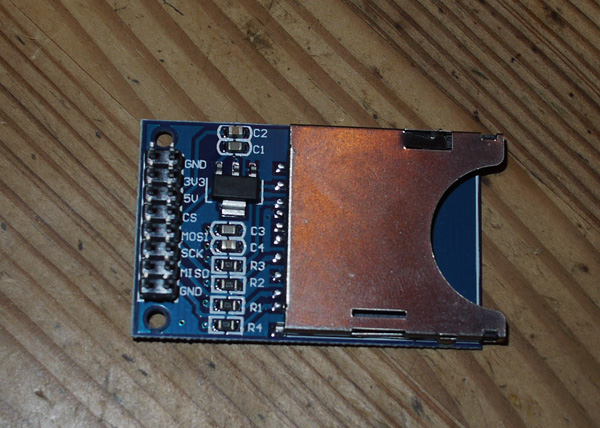 How do I interface it with something else? Is it possible to wire these pins to a USB plug? How? Or another interface?

Depends on what your end goal is.

Such a PCB is most likely designed to be used with, say, a microcontroller - for example those used by Arduino's, mBeds, etc.

You couldn't directly connect it to USB as the two have completely different signalling protocols. SD cards don't have the capability to be a USB slave device, so connecting it up to a USB port would likely just break something. In order to make a USB SD Card reader, you need a USB mass storage controller designed to make the bridge between the USB protocol and that used by the SD card. This could be either a chip designed specifically for the task, or a programmable microcontroller which you have written software for to allow it to act as a USB MSD and an SD card host.

If however your goal is simply to connect an SD card to a computer, the simplest solution is to just by a card reader, there are hundreds of different brands and products all largely doing the same thing. Many Laptops and PCs already have card readers.

Not the answer you're looking for? Browse other questions tagged usb sd-card or ask your own question.

11
How can I wire this SD card reader to RaspberryPi?
1
Add-on sd card in pi?

6
How do I change the IP settings by mounting the SD card in another computer?
0
Troubleshoot USB RFID desktop reader ACS ACR1281U
3
Connecting RFID reader over USB
11
How can I wire this SD card reader to RaspberryPi?
5
Raspberry Pi and the ACS ACR1252U USB NFC Card reader
1
mutek usb smartcard reader not detected(Probably missing drivers)
1
How to read keyboard/barcode reader data and send it to another pc?
1
How to connect SD Card Reader to Raspberry Pi Zero W?
1
Raspbian + usb card reader + sd card