Powering the Pi with 2 AA batteries

It works, and this single battery runs for at least 1.5 or 2 hours.
(Sidenote: during my tests, the output of the powerboost circuit was more like 4.2V than the expected 5V, but still, it worked!)

Is it possible now to power the Raspberry Pi with 2 rechargeable AA batteries? 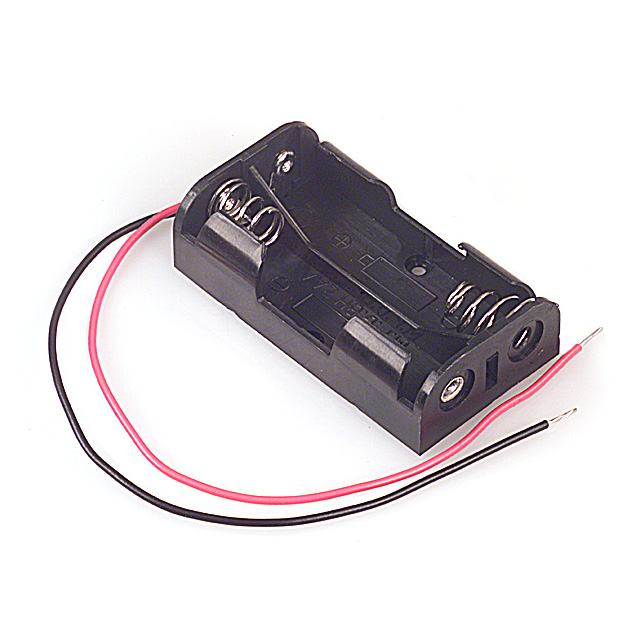 The Pi itself only needs 3V3 and less for its circuitry. It's supplied with 5V because USB peripherals and HDMI expect 5V.

If you don't need anything connected to the USB or HDMI then powering from 3V3 seems quite reasonable.

I think the chap who sent a Pi up into the upper atmosphere hoisted by a weather balloon cut out all the 5V circuitry and powered from 3V3.

You can use a DC to DC circuit, but bear in mind.

Taking Ohms law into consideration though, it will cut your tested time in half because it needs more amps to produce a higher voltage.

So this means that if the Pi requires 500mA, then the DC-DC on the battery converter actually needs 1000mA from the batteries, more or less. Since 2.4 to 5v is roughly half.

The next problem with powering 3v3 is that you need it be 3v3 constantly, because once the batteries get to about 3v it will start to brown out and rebooting your Pi, cutting your actual time into something more like 1/4 of what you'd expect.

The voltage regulator on the first Pi's was a NCP1117-3v3 which claims it can take up to 20v maximum input, I wouldn't try this because allot of changes are required to make that work properly. It also claims that it can handle a 1.2V maximum drop out voltage, but that comes with a price too, read further.

It is true that the input 5v is generally used for USB and HDMI... but that was not a design choice by Pi, but a world wide standard that is used in electrical designs. The 3v3 regulator works best when its powered by 5volts, not by 3v3 (unless its constant which a battery wont provide)

Taking that in to consideration, it would be best to connect 4*1.2v (rechargeable batteries) and connect it to 5v rail (USB), but you shouldn't use HDMI or USB devices to help prolong the battery life.

The 3v3 regulator will work at its best then, giving you a much better result in the areas of 75-85% efficiency.

This is obviously taking into account you are using 2xAA batteries with limited mah - If on the other hand, you batteries with 10 times the capacity, you could use 3.6volts because the batteries will be able to sustain an acceptable voltage for much longer... but still only towards the high 50% efficiency.

Once the voltage starts to drop, more power is required by the regulator to sustain the output voltage (ohm law again), and plotting a graph you would produce a parabolic curve over time, with an extremely sharp downward trend under 3.3v and a complete cut out near 3v.

If you interested in a true battery operated Pi that wont cause you headaches, look at my other answer. The initial investment surpasses the return value, since my Pi can run for many days if you adjust accordingly. You dont need to buy all the equipment, you can replace my solution with 8xAA reachable batteries instead, but investing in that will only return a fraction of power up time because of smaller capacities.

Yes you can power the Raspberry Pi from 2 AA batteries. I don't know if your boost converter could do it.

Adafruit's Minty boost should be able to.

How long it will run depends the batteries you use and the efficiency of the boost converter you are using. This page goes into the details of how to calculate it.

The rough result from that page is that for 2 alkaline AA's you could get about 1000mAh at 5 volts. My Raspberry Pi (Model B rev.2) draws about 430mA when idle so I would guess you might get about 2 hours.

Not the answer you're looking for? Browse other questions tagged power-supply battery or ask your own question.

4
Trouble powering pi from batteries
2
Power Management System for Raspberry Pi
5
Power with batteries on 3.3V
1
Why does my Pi 3 Model B with HAT DAC run fine on a 4V Lithium battery?
2
safeness of using 18650 + battery casing for raspberry pi
1
LiPo Voltage Drops
0
how to properly make a charging circuit -- 2s 7.4V to 5V 2A