I've been trying to make work the NRF24l01 RF module with Raspberry and Arduino, but I can't.

This is the version of the module I have: NRF24l01 Module

I'm trying to send the data from the Arduino, I already tryed with two Arduinos and all works fine

The Arduino Conection is:

The library I'm using for Arduino and Raspberry is: RF24 Library

When I run the "GettingStarted" example It shows: 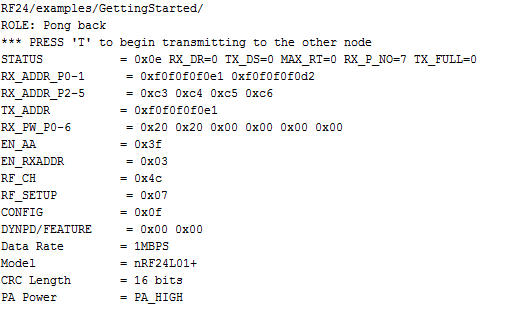 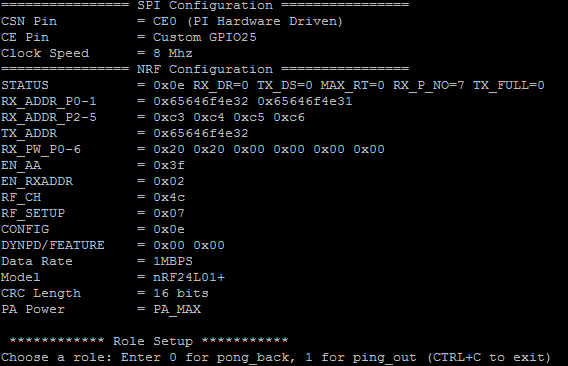 I've a 10 µF capacitor between VCC and GND in both modules.

However I didn't get comunication between the two modules, does anyone knows what can be wrong? I'll apreciate any help.

I found a tutorial in youtube and now I can send and receive data between Arduino and the Pi.

One of the things is not detailed in most tutorial is the importance of have the same radio pipe addresses in both device, it seems like obvius but when you don't now the library isn't obvius.

so I changed the line:

in both "GettingStarted" examples, after that I stated to receive information

the problem now is that, the library I'm currently using is writed in C++, but I have been working with python.

This other library: pynrf24 is write in python but when I try to run one of the examples I get an error

I have the spidev library in the same directory, I don't know how to solve that.

Anyone have any experience with pynrf24 library?

I faced the same problem when I tried to send data from an Arduino to a Raspberry Pi 2. I used this library https://github.com/TMRh20/RF24

I submitted a question on github https://github.com/TMRh20/RF24/issues/114 but in the meantime I found a way to make it work.

And a small delay right after it enters the loop

So in the end that part of my program looks like this:

This is my first answer, if it is not clear please let me know :)

You have this connected to 3.3V on the rPi, but the device can use up to 115mA. The 3.3V pin on the rPi can provide a MAXIMUM of 50mA. You would need to power the device from the 5V Pin and build a voltage divider out of 2 appropriately sized resistors to bring the voltage down within range of the module to make it work reliably. It is likely that it just simply does not have enough power in your current setup to transmit/receive anything.

Not the answer you're looking for? Browse other questions tagged wireless arduino modules spi nrf24l01 or ask your own question.