I used the method described here and here , which is a python script based on interrupts, to enable safe shutdown via push-button press.

These are the steps in short:

3- and then add the following to /etc/rc.local :

4- and these are the circuits: 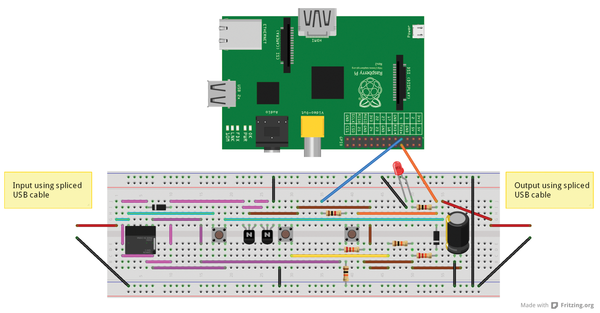 However, it didn't work.

The on-button and the hard-off-button work well. But when I press the soft-off-button, nothing happens at all.

My system is Xbian/Kodi on RPi B+ .

What's wrong with this method !!? And what should I do to get it to work !?

Thanks for your time and help.

I'm am not sure this is not a wiring issue, but I see some problems with the python approach here.

In the article, they define another "loop" later on with admittedly better code than raw_input. Adding the python line to rc.local also seems like a sketchy idea.

raw_input blocks until the user types something in and presses enter. During boot time, nobody WANTS to press press anything in order for the system to boot. Also, blocking forever during boot is usually frowned upon.

rc.local is executed everytime the system changes runlevel. See more info on runlevels. Basically, during a normal boot, your script will be executed at least once, but it is difficult to say since embedded devs sometimes use tricks in order to get things going. It is also possible that python will not load correctly during that time.

Here are my suggestions :

Try your script by starting it manually. I assume you can get a shell to your pi, so run it on a terminal an see if it works. If it doesn't then the fault is not related to the boot sequence.

After you've booted, you can use ps aux and check which process are running. You should see a python yourscript.py somewhere.

Use shutdown now instead of halt. I am not familiar with the later and trying it on my computer made it behave strangely. Alternatively, you can use shutdown -r now to reboot.

You can check your current runlevel with runlevel. In /etc/rcX.d where X is the runlevel, you can see all services that are started when the system enters that runlevel. I would suggest adding another entry there, near the end like S98mybuttonhandler which will be a sh/bash script calling nohup python myscript.py &. & is a command line trick to tell the shell not to wait on the program, "detach it". nohup is used to prevent SIGHUP from terminating your program. This is usually called when the shell which started your program closes, even if you used &.

Finally, consider using the suggested code in your loop (as the tutorial suggested) :

Using raw_input in the loop will prevent the script from running in background. Test yourself:

start the script manually with

and press the button. Nothing will happen. I assume the script already stopped as there is no raw_input or so! if you start the script manually like this in foreground

the system will shutdown when you press the button. But this line is unusable in rc.local and crontab (@reboot python /home/pi/shutdown.py)

I had to change the script to:

The above works for me.

Not the answer you're looking for? Browse other questions tagged gpio python power interrupts or ask your own question.

0
How can I detect how long a button is pressed?
0
Error while connecting Raspberry Pi to GPIO pin 7. but don't exucte onn off?
0
How do I use a hardware interrupt to restart a main loop?
0
How can I wait for two presses of the button then run function in while loop