FreeBSD - easiest way to install on my RPi?

Raspberry Pi support has been merged into FreeBSD-CURRENT a few months ago. However the latest installation instructions still involve a lengthy process of cross-compiling the entire OS on another machine to create an installation image.

I realise it's early days for this (and performance won't be great), but is there a quicker way to play around with FreeBSD on my RPi for a bit? Did anyone publish some pre made images of recent builds perhaps?

Update 2014-01-29: It has just been announced that the arm/armv6 snapshot images for Raspberry Pi are now being pushed up to the FreeBSD FTP servers on a weekly basis. You can download a copy from your local FreeBSD FTP mirror, in the /pub/FreeBSD/snapshots/ISO-IMAGES/ folder.

Update 2014-01-28: Glen Barber kindly published this SD image of the recent FreeBSD 10.0-RELEASE, which has also made huge progress in supporting the hardware. So just grab that for the easiest way to install (of course you can still build your own too).

I've set up a VM and built the image myself - here's the result.

Although there's been lots of progress, keep in mind it's still early days and you're playing around with prerelease code. Don't put this in production.

Stuff that isn't working yet (in this particular checkout):

Not scared yet? Fine, grab my prebuilt image:

Decompress this and write it to a SD card (at least 1 GB), then plug it in your Raspberry Pi and power it up. The framebuffer works, so after a few seconds you should see boot messages scrolling by and if you have a network cable plugged in you should eventually see a DHCP assigned address. 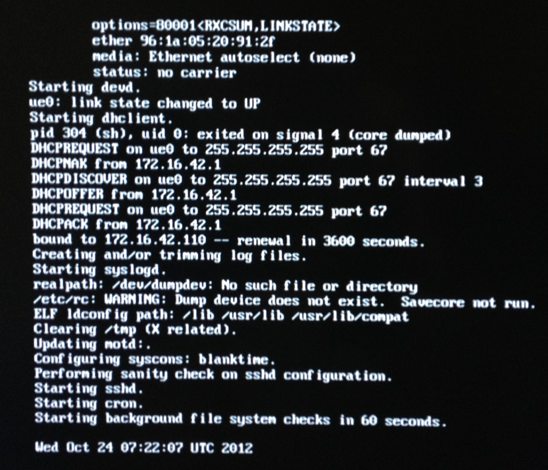 Now you can ssh in, using login root and password raspberry:

(optional) Building your own

This being CURRENT, it's bound to be out of date by the time you read this. So if you want the latest version, you can do what I did and build it. To do so, you need to follow FreeBSD-CURRENT, grab my build script and RPS-Bsc kernel config (goes into /usr/src/sys/arm/conf/) and run it. Depending on your machine, this could take a few hours.

Good luck and thanks to the nice people making FreeBSD.

Much has improved over the last few years. These days (early 2018) the process is very easy. There are ready-built images available for most (all) of the boards and the install process is quite easy to follow. Basically you:

Once the Pi is up and running, login – ssh, keyboard & display, or serial all work (for credentials use freebsd/freebsd over ssh or you can also login with root/root if you're local) and have fun.

You can find more info on the FreeBSD Wiki and nice walk throughs here and here - watch out though, apparently images used to get built with the default login set to freebsd/freebsd and at least one "reputable" source (the first walk through I link to) still claim those are the default credentials.

Not the answer you're looking for? Browse other questions tagged operating-systems image freebsd or ask your own question.

2
FreeBSD, GPIO, physical memory adresses
2
RPi Model B 512 MB--FreeBSD--text running off screen
3
ptxdist and Rpi
6
FreeBSD and Raspberry Pi 3
1
FreeBSD: Shared object "libarchive.so.6" not found, required by "pkg"
0
Is it possible to run FreeBSD for ARMv8/arm64/64-bit on the Raspberry Pi 3?
3
SSH logins (non-root) on new install of FreeBSD
0
FreeBSD on Raspberry Pi 3B+ not booting