i'm using the camera module of the raspberry pi v2 , it's pi NoIR

the problem is that the black color appeared as a purple and other colors are also different using it on day , i don't know what is the problem or if i could change some settings to make colors appears more original

This is typical for a PiNoIR camera (or any camera with the IR filter removed): black appears as purple because although it's black to your eyes, the camera's still seeing a fair amount of red (from near IR, invisible to humans), and a little of blue (from near UV, which IR filters aka hot mirrors also filter).

Here's a nice graph of CCD sensitivity, and hot mirror response which should explain the phenomenon far better than I ever could in text: 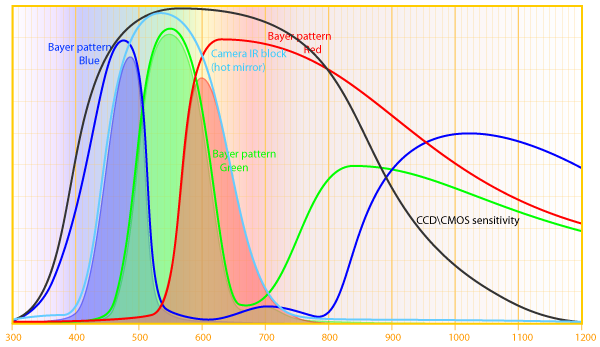 If you want it to look "normal" you need to stick an IR filter over it (or get a camera with an IR filter installed in it).

Not the answer you're looking for? Browse other questions tagged pi-2 raspicam modules or ask your own question.