Can I attach a SATA controller?

I would like to use my Raspberry Pi as a file server (NAS/SMB).

Will I be able to attach a SATA/RAID controller?

You can build a NAS using... 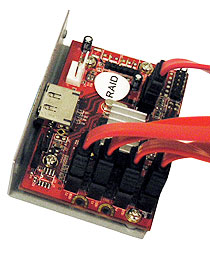 You just have to connect the Blue arrow to a SATA to USB converter. As long as you run at USB 2 speeds throughout, you can make quite a mean beefy NAS drive using a Pi.

To power the unit there is a standard plug (good old 1.44" Floppy Drive Connector) It is used in all PC's power supplies for accessories now a days. In this picture is a MOLEX converter. It is the smaller connector. The voltages are:

You need to check how many amps it needs. But if you going to power 5X3.5" Hard drives then a 250Watt power supply will be the best option for powering everything, even the Raspberry from the 5V line! 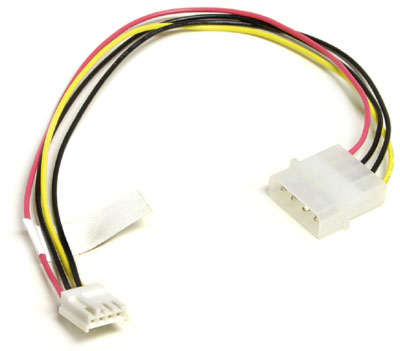 Specifically useful for Raspberry Pi 2+ and a nice alternative to untrustworthy RAID systems.

Instead of using the RAID function on these boards, configure each drive in JBOD and use ZFS to create volumes. ZFS is very stable and guarantees you won't lose a 'bit' of data before it tells the system it's done. Most RAID controllers, like these possibly, usually tell the system the data is written, then flushes data to the drive, which may become corrupt during flush and then absolutely tells nobody, 'dirty' little secrets.. ZFS, firsts writes, verifies and then says everything is OK. Plus, you can always move your drives into a FreeNAS setup and import the volumes easily as if nothing has happened.

Remember though, the bandwidth is limited to USB2 speeds.

Since the chip does not have SATA support. Your only option is to connect a SATA HD enclosure through the USB port.

Hardware part us easy, but bit-banging PCI-E protocol can be problematic since not all cards can be slowed down that much.

To build a custom SATA controller for the GPIO pins would not be a simple job, but may happen, one day. Then the Pi could be used as a NAS.

A NAS device would also be a great solution as the Network port is faster than USB.

Raspberry Pi is limited in bandwidth due to the USB ports and Ethernet sharing a single 480mbps USB2 host port.

3
How can I connect an internal 3.5'' SATA HDD to Raspberry Pi

4
Using a Raspberry Pi to manage a bank of several hard drives
2
Best HDD for NAS server?
1
Media server with a 3.5 inch hard drive
1
Pi with multiple HDDs from a powered hub
1
How to connect a SATA disk through GPIO (not USB)
4
Attach SAS Drives
5
Do HDDs drain power when not in use?