Been thinking for a while now, on how I could go about turning my RaspberryPi into a PC that my 4 year-old could play with.

I can see the (not entirely innocent) sparkle in his eyes when he wants to reach out and mess with my mouse and keyboard, and I think it would be great if he could start to experiment on a system where he won't accidentally harm anything.

Maybe even something where he could have some fun - like how he always wants to steal his mother's phone from her and run various videos on the Kid-Locked app she has.

I saw Qimo which looked promising, but it will not work on the ARM architecture.

Does anyone know how I might go about setting up maybe some similar solution on the Raspberry Pi?

(As extra bonus points, if I can set up certain videos to be streamed from YouTube or from downloaded sources, without him being able to really mess it up, that would be great)

At it's heart, Raspberry Pi is a computer and can run the things you can run on a computer (but you know that already).

For a 4 year old, look at installing the excellent gcompris software suite that will keep him entertained for days.

Take a look at Kano. It's a complete kit which allows your child to assemble a complete (RPi-based) computer, and has a full OS tailored to children, with an activity book. Comes with all components except screen. Some reading skills required as the recommended age range is 6-12, but that's where you could assist :) 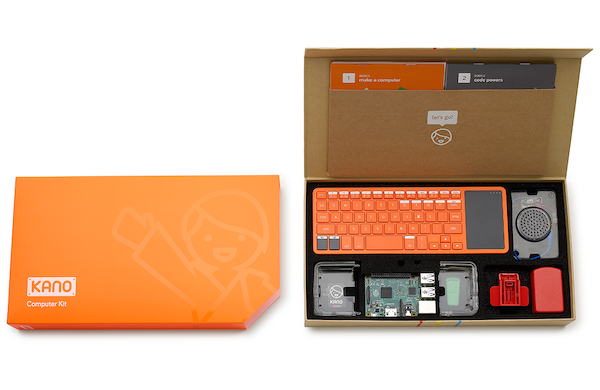 If you already have an RPi that you want to use, or if you just want to try Kano out, you can download the Kano OS image directly from their site. Of course anything using their peripherals won't work, but most of it is "normal" software. Note that their image uses an RPi2 - so it won't work on an RPi-B(+).

Not the answer you're looking for? Browse other questions tagged operating-systems setup or ask your own question.