I am using the Official Raspberry Pi adapter for my Pi but I can not scan for networks in the wpa_gui window like I should be able to. Under the tab "Current Status" in the "Status" field, it states that it "could not get status from wpa_supplicant" Here are screenshots of my /etc/network/interfaces file and my /etc/wpa_supplicant/wpa_supplicant.conf files. 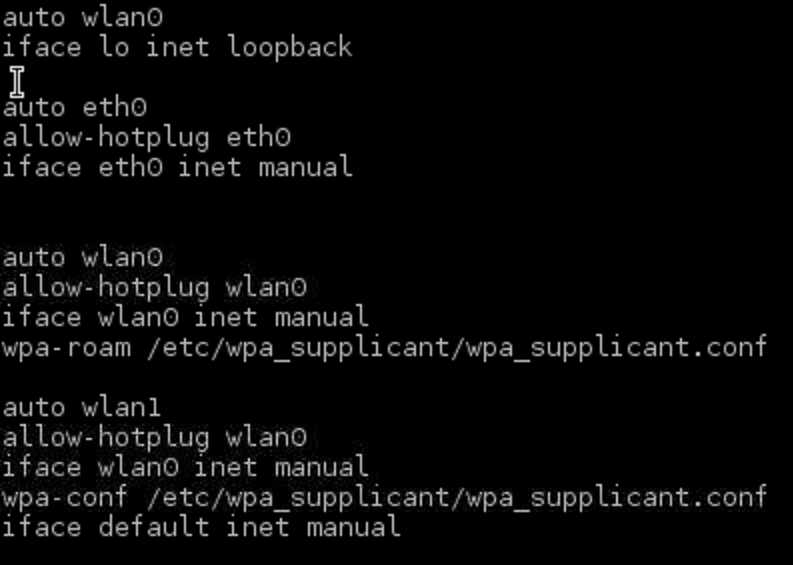 On the command line as root,try iwlist wlanX scan where X is the index reference obtained from the list under /sys/class/net. If it results in a list of all networks,then your wpa_supplicant.conf may have incorrect syntax.The image is too small to decipher

There are few additional things you could try

Examine the output from dmesg for any errors,drivers that are not loaded or those that do not exist.

If you have a tool called hwinfo, try hwinfo --netcard and look at its output

I have a similar situation like yours, an unbranded USB wireless card that displays similar noncan results. Mine is broken i guess,since it does not function under PC also.

You appear to have modified /etc/network/interfaces (for whatever reason). Put it back the way it was. The following shows the correct file contents (as well as how to setup).

How do I set up networking/WiFi/static IP address?

If you are having problems with a WiFi interface there are a few steps to check.

Before going through these confirm your Power Supply. WiFi sticks can draw quite a lot of current.

A late model Pi (one with a 40 pin GPIO connector) should have an improved power circuit and should run most modules PROVIDED YOU HAVE AN ADEQUATE PS which can deliver at least 1A (more if you have other peripherals).

Earlier models quite often could not supply adequate current to USB devices, so you should try a powered hub. (This doesn't hurt even with later models if the PS is marginal).

Run a lsusb in a terminal and you should see your WiFi stick in the output of the command. e.g.

Run a lsusb -t in a terminal and you should see a Driver. e.g.

lsmod will show all loaded modules, but it can be difficult to tell which is the driver

Run ifconfig -a and check the output. You should see a 'wlan0' in the output, e.g.

If any of the above fail, there can be many causes. There is no blanket solution, but at least you can ask an intelligent question to get help.

Not the answer you're looking for? Browse other questions tagged wifi gui wpa or ask your own question.

235
How do I set up networking/WiFi/static IP address?