So I bought a Raspberry Pi 2 to run SpillPass. It initially showed me a screen when plugged in via HDMI. Now the TV says no signal. According to the program cycling MAC addresses the device is cycling the MACs properly and the WiFi dongle is flashing properly. I am not sure whats wrong or what I should do. I only followed the SpillPass instructions and didn't install anything else. I don't want to unplug it because it might get damaged. The only reason this is an issue is I cannot shut the device down properly.

Here is a link to the instructions I followed to get it up and running. Any help would be greatly appreciated.

your tv says "no signal", so it's not getting anything from the raspberry pi -

If the problem persists, then it may even be a dead pi hdmi circuit

Okay, got it. Now how do I connect to the machine via SSH?

Looks scary. How do I use this? 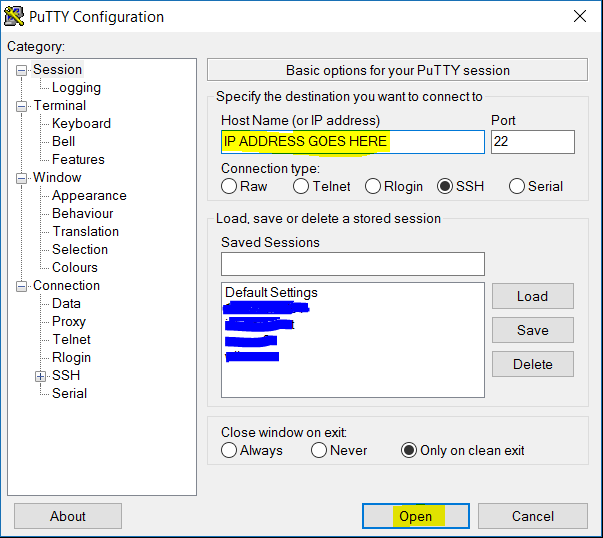 It's asking for login details. Help

Ooh. I see a terminal. Wait. Is this it?

Can I turn off my Pi? OMG, it might get broken.

Why did my screen go blank? What's happening?!

Secure SHell is, for most user, a way to access a shell ("command line interface" or CLI in some circles) on a machine across a Local or Wide Area Network. As such, provided you have a resolvable name (a name that can be resolved into an Internet Protocol Address) or the IP address directly AND the access credentials (in simple cases often just the user-name and password) you can use the remote host as if you were typing at a keyboard and screen on it when that screen and keyboard is actually the ones on the local host you are sat at.

If you have a *nix (Linux, Free/OpenBSD, Solaris, MacOS X) PC all you need to run is something like ssh pi@192.168.1.2 however the complication is that you may not know that 192.168.1.2 IS the address (it probably ISN'T) for you to use. To obtain that, one way is to run the nmap (network map) command with arguments to search your Local Area Network, and filter the results to get the one that matches the range of MAC (Hardware address) assigned to the Wired Ethernet Port on the RPi. One way is using the awk command:

on your PC - I don't have a Pi up and running now but the output should be obvious.

As of Windows 10 Microsoft has not got a native equivalent to SSH (As Far As I Know!) but there is a well known Free and Open Source solution in the form of Putty("It makes windows usable!") which when run in a Windows GUI, will create the equivalent to a text screen on the remote host. You will still have the issue of finding the IP address to use (though you may get somewhere with raspberry.local if Zeroconf/Bonjour is in use on the PC and the RPi.)

Assuming that you can get a SSH link running to the RPi for the first time you may get a warning that the remote machine's (the RPi) finger print is not recognised/known - this is to be expected - you will need to respond with yes to proceed - then you will be presented with a username then password prompts - unless you have changed them the defaults of pi and raspberry will be what you need to get in so that you can issue the shutdown -h -P now command before waiting say 45 seconds to allow everything to finish before removing the power...

Not the answer you're looking for? Browse other questions tagged screen or ask your own question.

1
Pi won't show anything on VGA screen
0
Screen is not working please help ;-;
0
How do you fix the screen size of raspberry Pi 7" screen
0
Daylight Screen
1
How to hide desktop to show only black screen
2
Using a Kindle Paperwhite screen with raspberry