How to automatically reconnect WiFi?

I'm using my pi to monitor my power meters. Data is transferred to PC by WiFi connection using Edimax EW-7811UN USB adapter. When the Wifi connection drops (switched off over night, or shaky connection), the USB adapter remains disabled.

Is there a way to restart the WiFi connection automatically without re-plugging the WiFi adapter?

I prefer to disable most of the network auto configuration and connection management daemon stuff and deal with it myself. Here's a (bash) script that will keep the connection up as long as the network is there and you do not have a glitchy wifi driver or power issues; the idea is to ping the router every N seconds, and if that fails, re-connect:

This all presumes an open unencrypted network (if otherwise, you will have to add the appropriate commands). I've used this approach on various linux machines, including the pi, and it works flawlessly; it will keep a system online indefinitely, even if it periodically goes to sleep (which the pi cannot anyway).

A decent check interval is 3-5 seconds; this activity will not significantly impact system resources at all.

You absolutely do need to disable the network auto-configuration first, . including ifplugd and other networking daemons, or this will interfere with your efforts:

How can I disable autoconfigured networking on Raspbian?

To start networking at boot (since I use the pi headless), I have this set to run on raspbian from /etc/rc.local:

/usr/local/bin/wifi is the script. If you don't know what nice is for, read man nice.

The point of the if is that if my wifi dongle is plugged into the pi, the 8192cu module will be loaded by the kernel at this point -- so wifi should start. If not, then it's assumed that the ethernet is plugged in and should be used (if it is isn't, dhclient will just crap out and there is no network access).

For this to work you will probably have to

So, this gets a headless pi onto the network at boot and keeps it there. If you wanted a way to switch to eth while running without logging in, you could do something with udev rules for pulling the wifi dongle out.

Well, there is a very simple solution:

That's all. Test this by turning off/on your AP; you should see that your Raspberry Pi properly reconnects.

I recently stumbled across a console application that sorts all the wireless configuration hell out. You can also use this tool to configure the LAN interface.

It will install quite a few other packages and run its own daemon in the background but it sure makes configuring everything a whole lot easier. Run it with 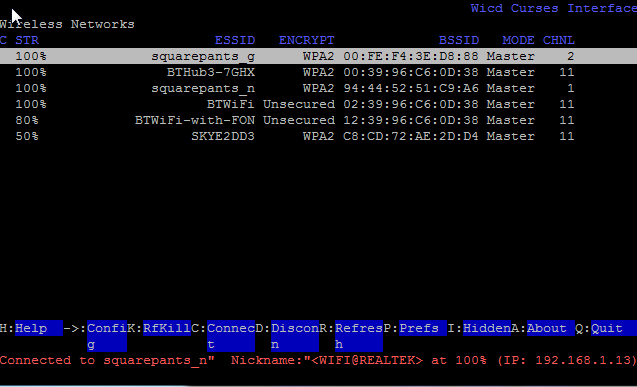 This can be solved with no extra scripts.

The roaming allows the interface to self-heal.

Try netcfg. Without further details about which distribution you are using, I can't provide many more details, but it should do what you want.

Another solution, as extracted from this one.
First configure your wifi settings: sudo vi /etc/wpa_supplicant/wpa_supplicant.conf adding a section like this:

Then your network settings with sudo vi /etc/dhcpcd.conf:

Then create this script file somewhere, for example in /home/pi/reconnect.sh and give it +x permission to be executable.

Then login as root with sudo su and edit root's crontab with crontab -e.
At the end of this file add this line:

That means: "execute that script every 10 minutes (as root)" - note without the */ at the start it would be "execute at 10 minutes past the hour, every hour".

Notice that everything that is echoed from a cron script (in this case only when disconnected) will be emailed to root. So if you have configured your mail aliases and postscript then you will receive an email whenever your pi's wifi connection went down and then succefully back again thanks to the script.

Somehow the rest of the answers were still not satisfactory. There still doesn't seem to be a standard functionality (for such a basic function) which just works, or works with few extra settings, which also works in RPi 3 and up.

Then there are some scripts which either make things too complicated or need hardcoding addresses, or rely on custom assumptions. For example, what does it help to try pinging default route or 8.8.8.8, if the Wifi maybe is local-only? What if it doesn't set a default route at all? What if the default route is set on eth0 and is always available and wifi is used for other purposes? The question is "how to reconnect WiFi".

This is all you need:

Not the answer you're looking for? Browse other questions tagged wireless or ask your own question.

0
Best way to automatically reconnect to Wifi? NetworkManager?
1
how can we know and detect that we are disconnected from network?
199
Prepare SD card for Wifi on Headless Pi
26
How to setup Network Manager on Raspbian
17
Falls off network ("Destination host unreachable")
8
how to disable raspberry pi power management?
8
Raspberry Pi wifi wlan0
7
How to set up WiFi with Raspbian "wheezy"
3
How can I disable autoconfigured networking on Raspbian?
4
RPi auto-wifi configuration
See more linked questions