The error it gives on boot:

Picture of the whole boot. 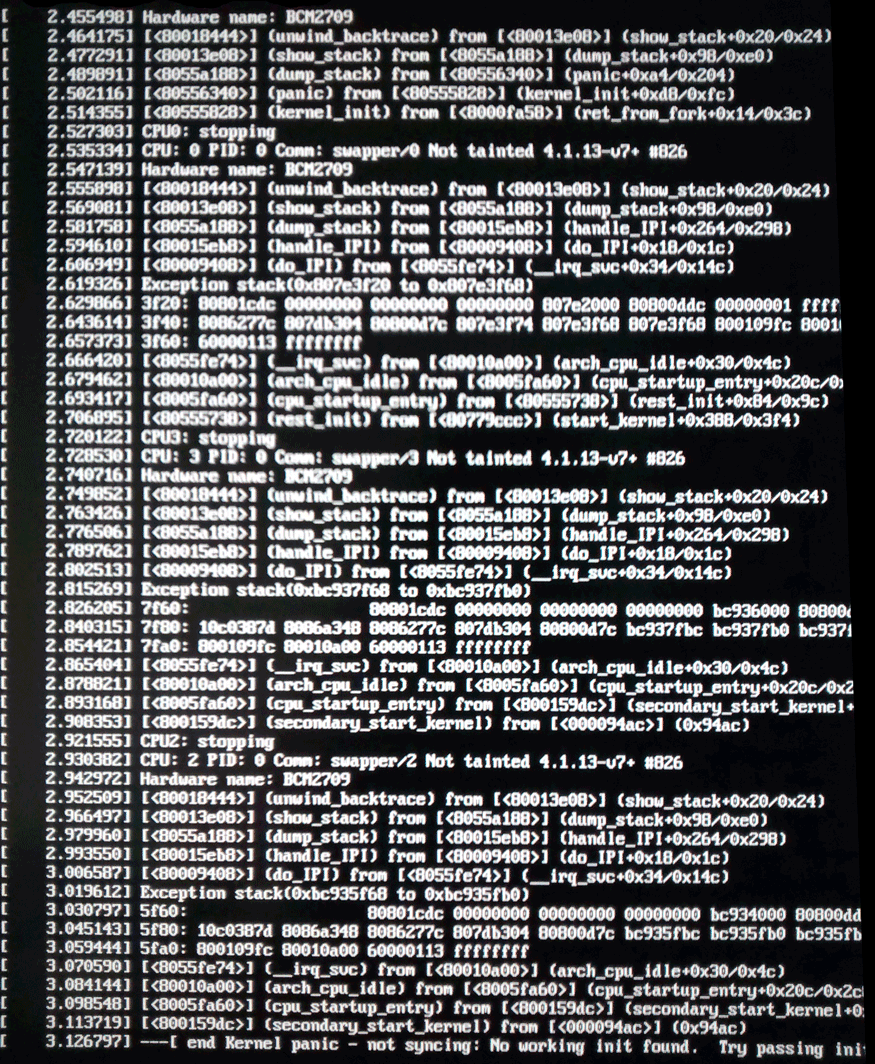 I've found people with this problem, but those are mostly ubuntu and solutions won't seem to apply to debian. I could be wrong on that.

Can anybody point me in the right direction?

In most cases for most people these are things you can easily check in order, but if this fails, reinstall the OS. It is unrecoverable by you.

However, in your particular case there appears to be a kernel failure of some sort leading up to this; for a more normal example of a truly missing or bad init, see here. So you could try replacing kernel7.img (that's for the Pi 2, which I think this is) with a fresh one, e.g., from a clean image; most likely the required modules will still be installed on your system.

I suggest before you do anything, if possible, you try another SD card with a fresh image on it since this failure could be the result of hardware failure (e.g. bad RAM) and you need to rule that out before you waste time on other things.

I've found people with this problem, but those are mostly ubuntu and solutions won't seem to apply to debian. I could be wrong on that.

Mostly no (as in, they do apply) and yes (i.e., you're wrong), although there is a broad range of possible causes. Depending on which era you are talking about, Ubuntu and Debian use different init systems (the first paragraph of that article also describes the essence of your problem, which is true regardless of which init system would have been used) -- one of SysV, Upstart (Ubuntu only) or systemd.

I had a similar problem after expanding the file system in My USB. The solution was to substitute the cmdline.txt with the default one.

In my case I am using an SD card for booting and the filesystem in a USB (root=/dev/sda2).

11
Custom Raspbian image fails to boot with "no init found"
0
Raspberry pi boot error: No working init found
0
What is the problem of raspbian boot error?
2
boot hang on random: crng init dome
10
How can I use an init ramdisk (initramfs) on boot up Raspberry Pi?
9
Ubuntu server on RPI 4 boot hangs on cloud init