I would like to use my RPi partly as a home file-server. I'm currently using a desktop for the same task. For instance, all of my family's pictures and home videos are on the file-server; but only a fraction of them are ever on the laptop. I currently use some custom rsync scripts to sync new data from the laptop to the file-server.

I've decided it's time to pay for an online backup service in order to get off-site storage of our most irreplaceable data (home videos, pictures, etc.).

I've seen some examples of getting crashplan to run; but that's it.

Does anyone know of any online backup services that provide official support for RPi? What about other services that people have successfully gotten to run?

Edit: I received a response from SpiderOak, they do not currently have any plans for supporting Raspberry Pi. But this is a company that actually has official support for the N900, so it might not be hard to convince them to support the RPi if a few more people ask them about it. I particularly like that they store the backups in a way that prevents themselves from seeing the data.

Found this script which is supposed to provide unofficial support for CrashPlan on the Raspberry Pi: http://pastebin.com/K3xGa28g

Edit: Here are some more related resources that would probably be useful for using CrashPlan on the RPi:

These first 2 come from this thread: http://www.raspberrypi.org/phpBB3/viewtopic.php?f=9&t=5398

This script was used to successfully install CrashPlan on the RPi http://geekfun.com/wp-content/uploads/2011/08/crashplan.sh_.txt

This post describes getting CrashPlan installed on a headless (no display) Linux server (but does not address the ARM architecture issue): http://www.liquidstate.net/blog/technology/installing-crashplan-on-a-headless-linux-server/

And this post describes using the CrashPlan GUI on another computer to connect to and manage the CrashPlan instance running on the headless server: http://www.liquidstate.net/blog/technology/how-to-manage-your-crashplan-server-remotely/

You could try ownCloud which you can host yourself and is incredibly easy to set-up. There are some useful walk throughs and semi automated scripts to set-it all up.

With very little effort you can have it running on Nginx. https://www.google.de/search?q=owncloud+rapsberry+pi&ie=utf-8&oe=utf-8&aq=t&rls=org.mozilla:en-US:official&client=firefox-a

You could then send your pi(or a 2nd Pi) off to these guys, who will add pop it into their datacenter for free: http://raspberrycolocation.com/

Seems like the perfect solution to me, and the only cost would be the cost of posting your rPi to them.

IDrive has linux scripts which work on rpi. The scripts use the QNAP NAS (ARM) binaries, which happen to work well. These scripts can also be used to set up scheduled backups

To make up an RPi-compatible backup service, I can advise you to install CrashPlan on Raspberry Pi. For that (as CrashPlan works only on x86 Linux) you need to use some Linux environment emulator to be set up and switched on as a first step. Below, I'm gonna get you a tutorial, with ExaGear Desktop emulator, as an example. On your side, you can use any type of a an emulator ;)

The installation manager will offer you to install a number of directories. Agree with all default options by pressing Enter to all the queries. Configure CrashPlan autostart

You’ll see a browser window with the empty fields to fill out and start up your account. Just go ahead and follow the form guide. After completing this registration you’ll start the backing up. So, enjoy 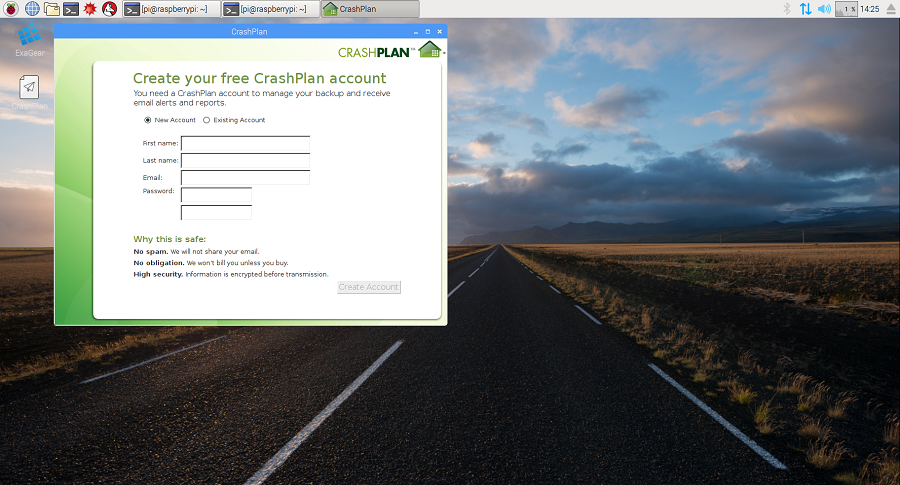 You may also use S3 from amazon web services, which has a storage gateway accessible in linux for slip streaming backups.

Not the answer you're looking for? Browse other questions tagged backup file-server or ask your own question.

3
Access external HD formatted as Mac OSX Extended (Journaled) from Windows PC
1
Raspberry Pi and Amazon Cloud Drive, is that possible?
0
How can transfer files between RPI and Windows PC via Bluetooth_OBEX?
4
Using RPi as internet accessible backup server for multiple PCs
4
Is there a way to compress a backup of the RPi because the backup has empty space?
1
Restoring a Raspbian system with an rsync ssh backup: permissions at backup time