How did this ruin my pi?

I have a 5 inch Waveshare Touch Screen. I was testing something today and had power going to the screen (not the pi) which is okay because they share power when connected correctly. I was paying attention to something else and aligned the pins wrong. I noticed almost instantaneously but it was too late, I could smell the damage. I had baked my pi.

I made an image to show you exactly what I did wrong. Most of this is self-explanatory but the last part may not be so here is what is going on underneath "INCORRECT OVERLAP":

What I'm curious to know is why did this fry my board?

Sorry about your Pi - hope you got a new one :)

You've probably seen the discussion between goldilocks♦ and I in the comments and have a pretty good idea about what my "post mortem" will say. However, we both missed the fact that the Pi wasn't powered which changes the scenario a bit. How was the screen powered anyway if it's meant to get juice via the Pi pin header?

Since we're dealing with 26 * 2 pins that might also be inter-connected via the screen's internal circuitry, there's an awful lot of complexity here. However, important factors always are:

The first three bullet points mainly apply to a running Pi (they're software-configurable) but the last two, the voltage level and the pin impedance, are always important since the Pi's GPIOs are not 5v tolerant and since the impedance will determine how much current can flow into the Pi.

When the Pi is running, a pin that's configured as an output and set to a high state will attempt to supply all the current it possibly can to whatever you connect. If you're lucky, you've connected it to a high impedance input (or you've added a resistor) and nothing will happen; if you're unlucky, you've connected it to a low impedance/resistance input or a ground connection and it'll fry. The only connections that can be ruled out upfront are the ground to ground connections; providing that the ground potentials of the Pi and the screen are the same, these should be safe.

Anyway, since your Pi wasn't powered, it's more likely that it acted as a current sink - allowing the screen to find alternative routes to ground. I don't have a Pi and multimeter at hand right now but if an un-powered Pi pin has a low impedance/resistance, connecting a power source directly to it could easily create a path to ground that would allow hundreds of mAs to go through the pin - add to that the over-voltage and you have two serious issues. The data lines (SCL, SDA, etc.) might also be problematic but I think the 5v screen connection is the most likely candidate. I've highlighted some of these connections below and added brief explanations. 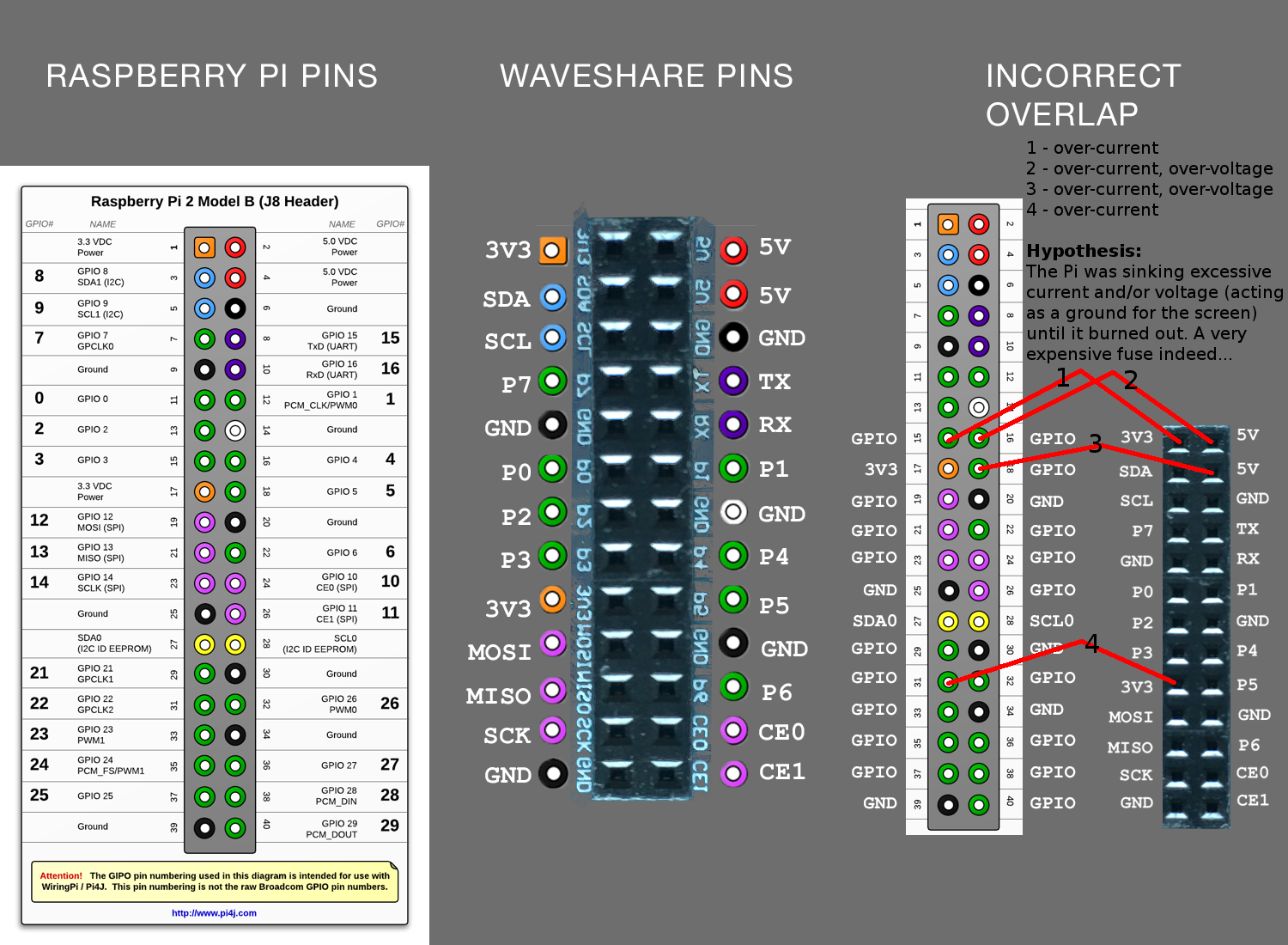 Disclaimer: I'm no electrical engineer; just a nerd who's seen plenty of components go up in smoke - including a Pi!

Not the answer you're looking for? Browse other questions tagged pi-2 power or ask your own question.

2
Full screen browsers vanish randomly?
2
Pi broken after trying to connect to neopixels
0
Raspberry pi (running ubuntu 14.04) citrix problem
1
Waveshare 4inch LCD drivers, error after installation: PANIC: VFS: Unable to mount root fs on unknown-block(179,2)
0
Did my Raspberry Zero W Burn?
0
Pi screen freezing and board getting warm with LoRa
1
I think I fried my Raspberry Pi, but I'm not sure
0
My Pi 3B+ did not start out of box
1
Did I just fry my Raspberry Pi Pico?