I am building a bunch of slave devices (Arduinos) that operate autonomously, but will report data back to a single raspberry pi and update their clocks from the pi's time.

I've only worked with one arduino using serial, but I would imagine that 20 arduinos needs a special solution. I don't know how to split serial, but I've also considered SPI and I2C. Would either of these be the way to go?

Given that there are 20 units, I don't think I should go with wifi as I fear there would be loss of connectivity often. I prefer a hardwired method.

EDIT: Also, these arduinos won't be close to each other. They will be spread out, no more than 30 feet from the pi. 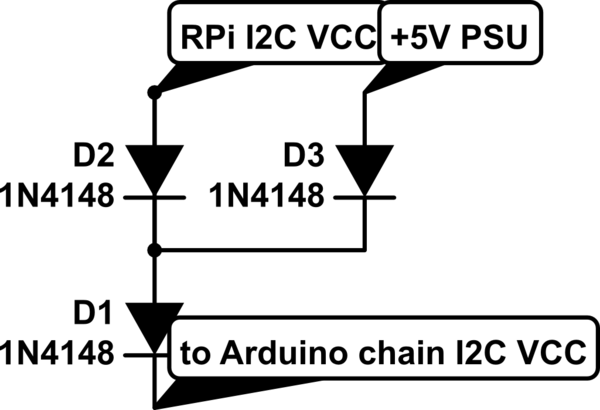 I2C will be just fine, but don't forget to apply a power and use diodes to ensure a proper power flow

I'd use Wifi and sockets. It's relatively simple to use Qt (or even plain C++) to implement a multi-connection client/server. There are lots of tutorials on the net.

You should be able to use I²C over these distances with careful layout. I would suggest you use the slowest I²C speed (although the Pi default is already 100kHz). You should also use a bi-directional level converter at the Pi end as the high level would otherwise be marginal for the Arduino.

A wired solution would be to use RS-485. You can connect many devices on a single twisted wire (two wire) cable. There is an good example at https://arduino-info.wikispaces.com/SoftwareSerialRS485Example. The modules shown are really cheap. I see vendors having 5 of them for 7.99. You can also use a USB to RS-485 dongle on the Raspberry Pi.

Not the answer you're looking for? Browse other questions tagged networking arduino or ask your own question.

1
Raspberry Wifi Dongle + Arduino fails when I connect one servo
4
How to connect Raspberry Pi and Arduino with SPI?
4
How can I use SPI to communicate with 3 or more Arduinos?
4
Simple data transmission from multiple Arduinos (client) to Raspberry pi (server) wirelessly
2
Need advice for connecting multiple arduinos to raspberry pi
0
Wireless transmission multiple arduinos to raspberry