Controlling 2 motors and a servomotor

I've been looking at tutorials that discuss individually how to control motors and servomotors, however can they both be controlled by the same type of motor boards?

If I've got a project that uses 3 individual motors

is there any particular setup/motor board anybody can recommend?

For DC motors such as fans, you can use a power transistor to switch power to the motor. An H bridge is probably over-kill since you only need the motor to spin in one direction. A circuit like this will probably suffice: 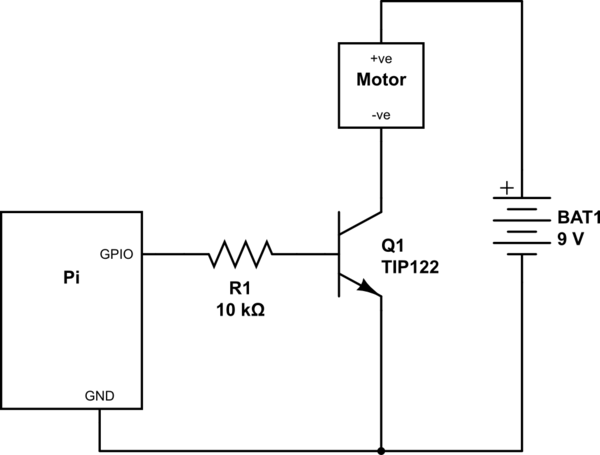 When the GPIO is low, the transistor will be off and no power passed to the motor. However when the GPIO goes high, the transistor will conduct and the motor will run. The motor may produce "electrical noise" which may disturb the operation of the Pi by producing spurious signals. You can minimize or eliminate that with capacitors and chokes around the motor as well as using shield or twisted cables.

If the motor noise is still causing problems, an opto-coupler can be used to isolate the solution into two disconnected circuits.

I have also run into problems with electrical noise with the servos and again an opto-coupler solved my particular issues.

Fans are usually standard DC motors and it's simplest if you buy an inexpensive motor driver board.

Look on eBay for inexpensive modules based on the L9110S or the L298N, or even consider a single chip solution such as the L293D if you are happy to use a breadboard.

Each of those modules will drive two DC motors and allow you to change direction (pointless with a fan) and vary the power (by providing PWM signals to the motor driver board inputs).

Check that the fans don't need more power or voltage than the module can supply (unlikely to be a problem).

The servo doesn't need a motor driver board as it contains one. With a servo you just supply power and a PWM control signal.

The Pi can generate the PWM signals you need.

2
controlling two motors with an L293D
0
Powering motors using seperate power source and relay circuit ?
1
How to get an IR sensor and motors to work together?
0
Controlling a led button and receiving input from that button
0
Use Python flask or NodeJS for controlling stepper motors via Web?
0
Controlling 4 servo motors through hardware PWM
0
Controlling multiple servo motors on rpi 4