I'm trying to write a script that automatically changes the playback/capture audio levels based on the device that is connected.

Thanks to a similar question here: https://askubuntu.com/questions/97936/terminal-command-to-set-audio-volume

I learned to use the following command:

The problem I have is that it seems like the capture control shares the same name as a playback control: Line 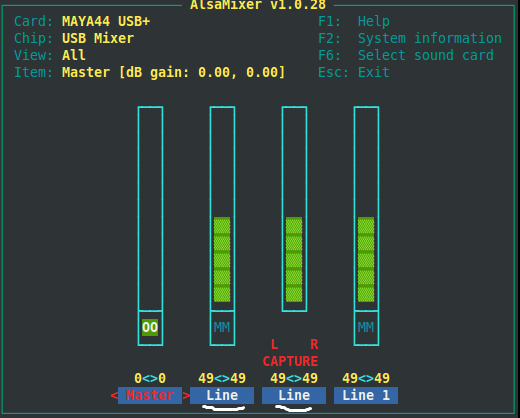 Changes the values of BOTH controls.

As mentioned above, I'm writing a script to do this automatically so I don't want to manually go into alsamixer and do it manually.

Is there a way to rename the controls so that there isn't a naming clash? Otherwise, is there some sore of suffix or prefix I can add to the 'Line' value to specify that I want to affect the CAPTURE device? Would using pulse audio in some way be another option?

Basically, how I can change the capture control values without affecting the playback values?

Use amixer -c2 controls to list all the low-level controls.

Then you can use amixer -c2 cset .. to select specific controls by their unique ID number.

Not the answer you're looking for? Browse other questions tagged raspbian audio raspbian-jessie alsa pulseaudio or ask your own question.

1
redirect input audio to output with USB sound card
0
auto execute a terminal command in raspberry pi startup
1
sound output stuck on HDMI (working)
0
How can I change the audio output device from the command line?