I need your helpful insights.

I have a problem whit my SD card and I cannot make it work with Retropie.

-I am using a microSDXC Samsung card with 32GB of capacity.

-I am trying to install retropie for raspberry pie 0.

I am formating the card (with either SDFormater v4.0) and the space is ok.

Nonetheless when I install the retropie image (either with win32 diskimager or Etcher ) the card is not working. 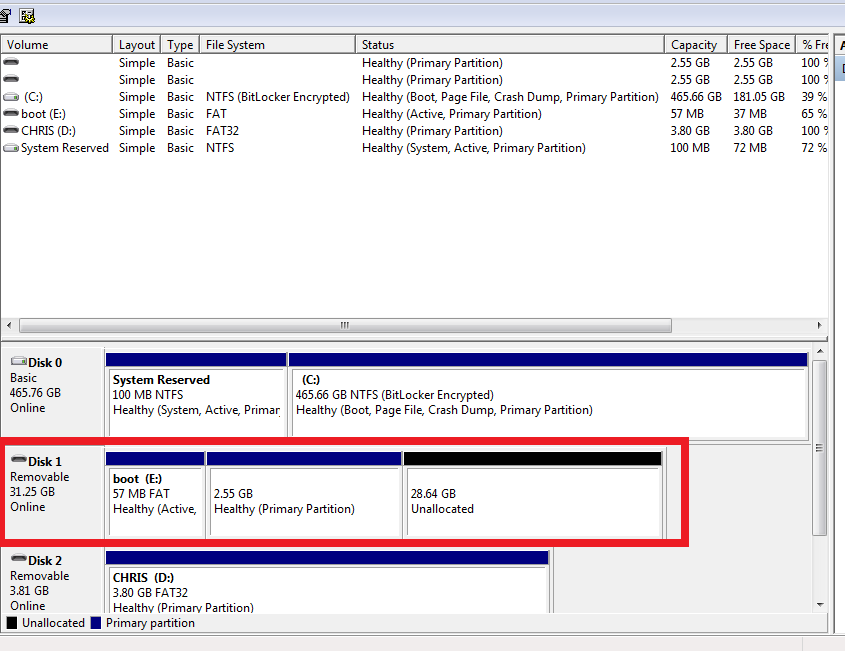 When I am plugging it to the pie it does n't load... Any ideas why??

That is a perfectly normal SD card allocation when an image is first flashed. The reason behind the unallocated space is because it would be impractical to have an image for every size of SD card out there, so the image only contains the needed data to get an OS, and you can then expand the partition to fill the card. the OS contained on the image usually has a tool to resize the partition on first boot, or when the user tells it to.

As for the pi0 retropie not displaying anything, Adafruit's RetroPie image is configured to work with the piTFT or compatible display and not with the HDMI or PAL/NTSC output. The firmware on the SD card could also need to be updated to support the pi0, as it uses a different device tree than the older pis. The ACT (green) LED should indicate what it's doing.

Firmware since 20th October 2012 no longer requires loader.bin, and the flashes mean:

If start.elf won't launch, it may be corrupt.

Note that 4-flashes may point to a defective SD-card holder, if one or more of the data contacts is intermittent it can lead to this problem.

Not the answer you're looking for? Browse other questions tagged sd-card retropie or ask your own question.

13
SD Image won't fit on SD Card
3
On RetroPie is it possible to speed up the time needed to switch from an emulator back to emulationstation?
6
Raspberry Pi 2B+ Boots once
1
How do I set up live Twitch streaming from RetroArch on a Pi 3?
0
Pi boots to rainbow screen and flashing RED LED when using BerryBoot
0
256 gb class 3 SD card stop booting
0
Unable to clone old sd on new one (same size) with win32 disk imager