On the left of the Raspberry logo, there is a DSI connector. I am not familiar with this standard. What sort of displays can I connect to using this connector? And can I buy these displays off the shelf?

Also are there any consumer device that we could scavenge a display from that would work with the Pi? Mobiles? Game Consoles? Kitchen implements? :)

The Raspberry Pi foundation has announced that The official Raspberry Pi touchscreen display is now available. This is a ten-point touchscreen, which connects to the DSI connector and has full kernel support, after an upgrade.

Given that this has taken the foundation several years to finish, I doubt it is something that anyone could easily hack together from spare parts.

The Display Serial Interface (DSI) is a specification by the Mobile Industry Processor Interface (MIPI) Alliance aimed at reducing the cost of display sub-systems in a mobile device. It is commonly targeted at LCD and similar display technologies. It defines a serial bus and a communication protocol between the host (source of the image data) and the device (destination of the image data).

At the physical layer, DSI specifies a high-speed differential signaling point-to-point serial bus. This bus includes one high speed clock lane and one or more data lanes. Each lane is carried on two wires (due to differential signaling). All lanes travel from the DSI host to the DSI device, except for the first data lane (lane 0), which is capable of a bus turnaround (BTA) operation that allows it to reverse transmission direction.

According to this forum thread DSI screens will need new GPU drivers to enable DSI output:

if you manage to use the dsi connector (i.e. kidnap some bc engineer and let him produce a new gpu-binary for your dsi-connected screen) you could in fact have a working dual display setup...

As such, although official DSI screens are now available, and there is kernel support, it is unlikely that that such support would extend to arbitrary other implementations of DSI screens. Given what the wikipedia page says about the protocol, DSI is hardly a smart way of doing things these days (the protocol is complicated by the need to support displays without on-board memory) and it is possible that any given GPU binary may only work with a limited set of specifically supported devices, rather than supporting any arbitrary DSI display.

The Nintendo DS uses a touch screen DSI display, but so far that is the only consumer device I have seen that you can get replacement screens to be fitted to the Raspberry Pi. I have no idea what compatibility issues you might run into if there are any proprietary measures taken though, and I am assuming the ribbon cable is a standard DSI interface cable.

From Using cell phone screens with any HDMI interface, there is a video controller, made from an Arduino DSI Display Shield with a programmable FPGA (Xilinx Spartan-6-SLX9), that bridges the iPhone4 display interface to DSI interface. 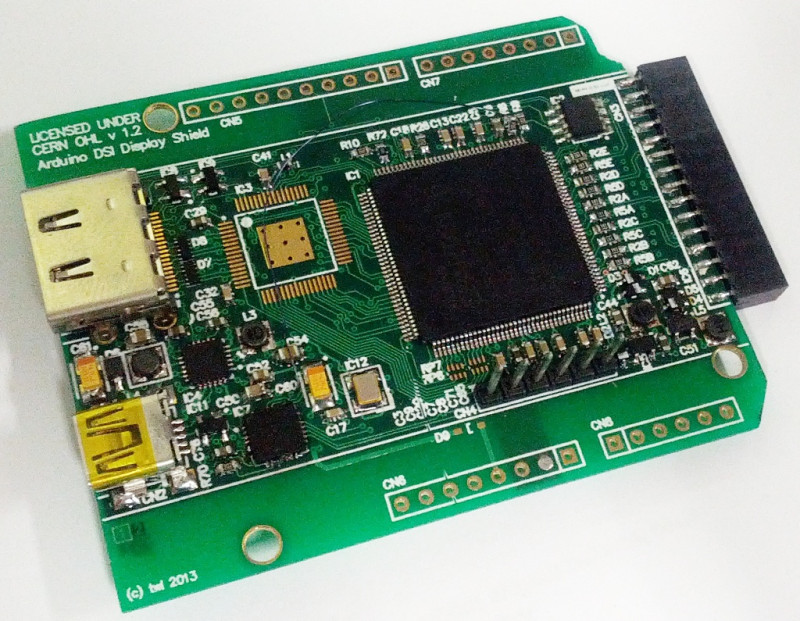 Not the answer you're looking for? Browse other questions tagged video dsi or ask your own question.

5
how to mount LCD/TFT screen on raspberry pi

4
Is it possible to extend the DSI connector?
2
Are there already “official” DSI screens available?
0
GStreamer video on DSI screen without X
0
DSI 7inch touchscreen does not work anymore
6
Using the DSI connector on RasPi Zero W
1
Show multiple HD streams at once on raspberry pi?
1
Will either of these displays work on the Raspberry Pi DSI connector?