How to orientate camera and keep it steady?

As you can see on this image 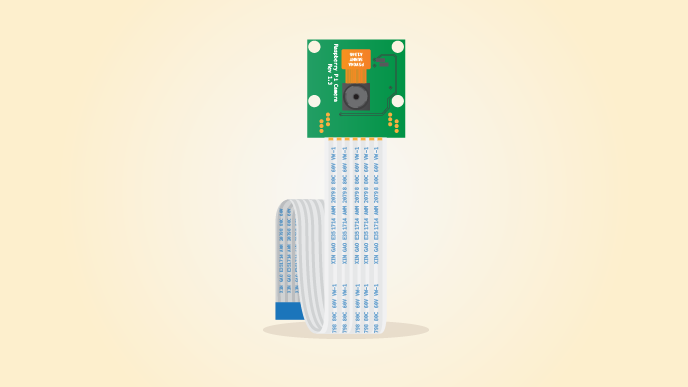 the camera module is linked to the board through a non rigid cable. I'm wondering if there is some semi-rigid duct that could wrap the camera, orientate it where necessary and keep it in place. Just like a desk lamp basically. Do you have a reference for that ?

There are various cases and mounting plates available for the camera; some include screw holes sized for normal camera tripods (which come in all kinds of sizes with bendy spider legs like a desk lamp). Also, if you have a drill and can get sufficiently small screws/bolts (don't bother with a standard hardware store, they probably won't have them), it is easy to mount inside a small piece of dollar store tupperware, a wood box, a plastic desk lamp chassis, etc.

In fact, you don't even have to bother with screws. Below is a camera mounted inside tupperware using layers of cardboard under duct tape to seat it, held in place with an improptu velcro strap. Notice there is an orange ribbon cable protruding from the top of the camera. There's then a flap of cardboard and duct tape that fits across everything snugly to separate it from other stuff in the box. It's folded back for the photo. The only hole I had to drill was for the lens to fit through; I then glued a very thin layer of clear plastic (from some packaging) over the hole on the outside; this does not interfere with the camera at all in so far as I have used it. More squirrel pics than anyone would ever want taken with this one. Also, since the hole is quite small and the lens plain black, if you leave the outer plastic layer off there are all kinds of things you can deviously conceal this inside of...the squirrels did not seem to care (and only chew through plastic if there is food on the other side).

Below is a professionally made mounting plate (which would not be hard to replicate if you are good with the right tools); it came with the four little bolts you can see sticking out the back through the camera board. I got this from Adafruit, but if you search for "pi camera cases" there are all kinds of things around. There is no ribbon on this camera but you can see the connector at the top. A red arrow points to the hole in the plate intended for use with a standard camera tripod (the other red arrow), which just happened to be the same size as the accessory arm on a "submicro" servo. The geometrically astute will note the top assembly is exactly the opposite of what you would want for a normal pan/scan mount (unless you like goofy angles). Fortunately, there's a third (and potentially fourth...) axis of rotation at the bottom. 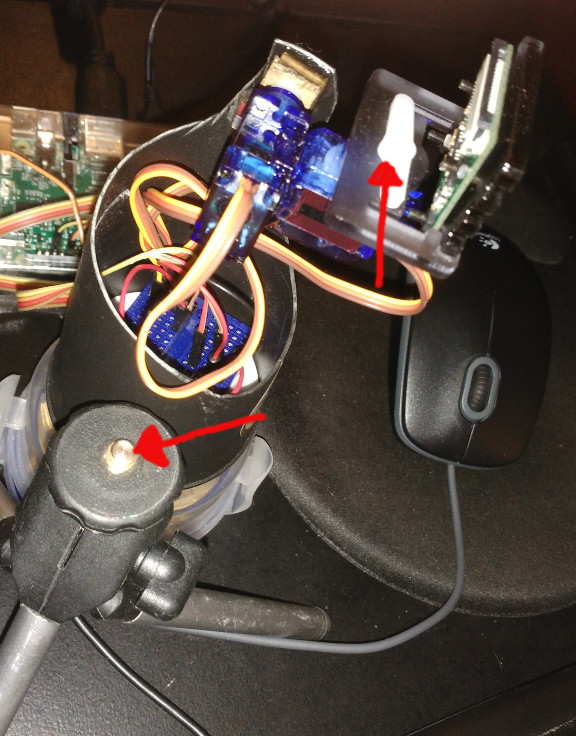