I have recently bought and assembled a Raspberry PI 3, official touchscreen and case / enclosure.

I want to be able to use it whilst out and about with a rechargeable battery and if possible allow the battery to recharge whilst running from mains power supply.

Can anyone make any recommendations or point me towards a tutorial?

First a warning about the fact that stated output voltage (in this case 5V) and current (for the 3 with nothing attached, at least 1A) of a "battery pack" aren't the whole picture here.

I have a 21200 mAh 5V, 2A power bank (the kind sold for recharging) with a set of Boston Power "Swing" 5300 mAh lithium ion batteries. These have a nominal voltage of 3.65V. I think if you open up most power banks you will find something similar. 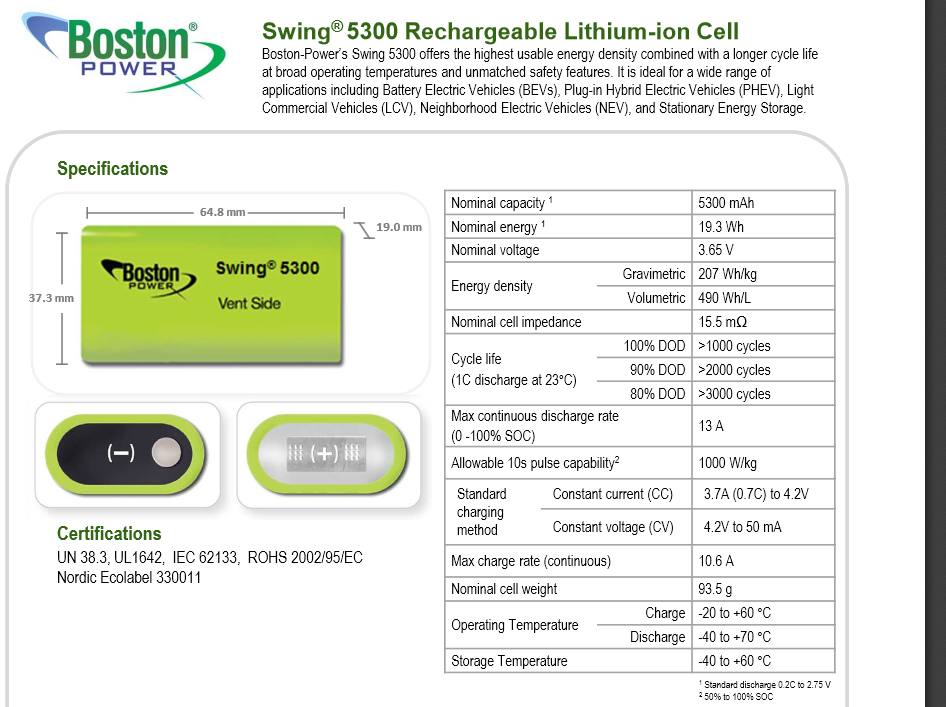 That will run a Pi 3, but the undervoltage warning (little rainbow square on display, red PWR led goes out) flashes intermittently when the CPU is working. It's been fine to the extent that I've used it that way, which is not much.

To be fair, power banks aren't sold for this purpose. The data sheet linked above for the actual batteries shows they don't output 5V and don't really output a very consistent voltage at all, which is how batteries usually are -- go check a 1.5V battery that's been in use for a while with a multimeter. Even though it probably works in context, it isn't outputting 1.5V anymore. It works because battery based devices either don't really depend on a consistent voltage (e.g., flashlights, which just get dimmer) or they have some kind of onboard power regulation to compensate.

The Raspberry Pi is not a battery based device and will not help you with this issue. Also worth noting is that the mobile battery powered devices we are most familiar with and most commonly used with power banks -- smartphones -- don't have any 5V circuitry in them.

To make a total guess as a electronics neophyte, I'd say likely the four batteries in that pack are all in parallel and the voltage is stepped up (making the claim that it is a 21200 mAh battery pack subject to the caveat that it won't, at 5V, put out 1A for 21.2 hours).

I believe a problem with stepping voltage up is it costs you current. Current output from batteries isn't regulated at all, meaning you can actually draw a lot (very quickly draining the battery), so that is not such a big deal, but to protect attached USB devices, a USB power pack also has to regulate current. Combine this with the fact that it is stepping up the battery voltage and you have something that, unless intended to do so, may not deal well with things that have sudden spikes in current draw. Things that are being recharged (i.e., other batteries) won't do that, but things that are being powered directly (the Pi's CPU) will.

The long and the short of this is, USB power banks aren't geared to this kind of use and will tend to disappoint. I believe the best solution is to create a supply yourself1 from actual lithium-ion batteries (lots of options there, but most commonly <5V) and a DC boost converter -- something which is intended to provide a consistent voltage for the purpose of powering devices, not just recharging them.

Be careful with that though, because a simple DC boost converter may not compensate for the dropping input voltage from a battery. They're intended to boost one consistent voltage to another. However, there are ones around that are intended to compensate for exactly that; this is an example end user device based on this boost converter -- so if you can find anything with a TPS61090 inside, it should be worth a try.

Note that device also allows you to recharge the batteries while it is in use.

1. A few good reasons for that: 1) It will probably be cheaper as this is a less common need than you may think, 2) It's more flexible, 3) The DC booster hardware should outlast the batteries, so you don't want them all together in a "power bank" style package.

I'm not sure what the policy here is on product recommendations, but I've had some great success using a Jackery Titan Premium http://www.amazon.co.uk/dp/B010MP3K0O

Not the answer you're looking for? Browse other questions tagged pi-3 power touchscreen battery or ask your own question.

1
Powering Pi 3 by power bank
0
xiaomi Power bank for Rapberry pi 3
0
RAVPower USB Battery Pack as Power Source
5
Is a 2.4 A 5V USB charging port enough to drive a Pi 3?
0
Is it ok to power rpi3 + high current usb device with battery pack and y cable?
0
Should I go for a power bank that has 5v output and 12 volt output

10
Battery Power Requirements
2
Power Management System for Raspberry Pi
2
Portable power supply for a PiHub?
1
Powering the PI 3 Model B with a battery pack
0
Is it okay to use the official Pi 3 PSU with a Pi 2?
3
Am I Correctly Calculating mAh for the Pi?
0
Uninterruptible battery power for a Raspberry Pi