What is the temperature behaviour of a Raspberry Pi in an enclosure?

There has been some comment about suitable enclosures for the Pi and its temperature behaviour.

Are there measured data for this?

Below are the results from an experiment examining some properties of the Pi in a rough and already mostly sealed enclosure.

The ambient temperature was 30C, the blue dashed portion of the graph represents the time from power up of the Pi until it had reached thermal equilibrium whilst in idle mode.

The second, red, portion of the graph is the temperature when the CPU was placed under full load using a simple PERL script. There was some network I/O , enough to continuously update 'top' running on a remote shell.

The enclosure was the cardboard box that the Pi shipped in, it is a little larger than the dimensions of the board but roughly the same shape as the board itself. Leads were fed in through the flaps at the ends. The 'enclosure' was placed on a flat surface during testing, but was otherwise in free air.

No direct CPU temperature measurements were taken, but the interior case temperature was monitored via a thermal sensor.

You can see from the graph below that relatively little temperature rise is evident from running the CPU at full load, perhaps 2 degrees C. 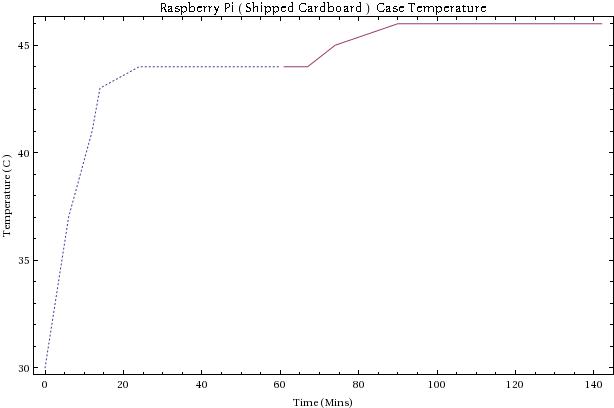 There was no direct graphic activity to contribute to the thermal load.

Not the answer you're looking for? Browse other questions tagged case temperature or ask your own question.

75
Can I use an airtight case?
2
Thermal Management in Raspberry Pi Clusters