How can I mass-provision a lot of RPi's at once?

Here at Stack Exchange we're deploying a bunch of Raspberry Pi's to do various displays in our new awesome NYC headquarters. I'm trying to mass-provision the units with the same SD Card image, however writing the image at 4MB/sec is painfully slow when it's a straight 16GB image created via dd.

What options do I have to mass-provision a lot of Raspberry Pi's all from a single source image? I don't have time to get an image pre-burned by a distributor.

This video shows one solution (albeit not a particularly elegant one). Essentially the user has daisy-chained a series of USB Hubs and SD Card writers in order to burn 10 SD card images at a time. 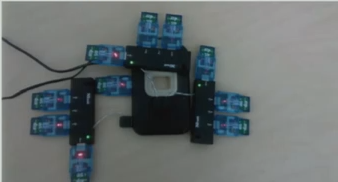 He suggests that the script for doing this will be available from his GitHub but unfortunately I cannot find it. This appears to be his personal website if you want to contact him for the solution.

However, I doubt the script is very complex and wouldn't take much writing from scratch.

A USB 3.0 SD card reader should be able to feed data at the speed limit of your card. It's still going to be much quicker to burn a minimal system, and let each Raspberry Pi do the resizing on second boot.

I am doing a similar thing with u-boot for starting up, using its pxe boot for the kernel and nfs later for the root filesystem. That way you only need to write about 3 mb which is really quickly done. It also means, you can ease maintenance by updating the only master copy on the nfs. The downside is, startup will be slower.

Alex Bradbury from the Raspberry Pi foundation is currently packaging up a tool which allows you to flash a bunch of SD cards at the same time (though it is limited to the number of hardware SD card slots you have).

His Github account currently does not have it available publicly, but it should be done soon (from what he told me at a recent conference).

17
How can I install GStreamer gst-omx?
0
How can I install emacs without local (Pi-based) network access?
1
How can I download packages to windows so that they can be installed in raspberry?
1
How can I install Lantern on Raspbian?
0
How can webpage made in flask, be accessed in web?
6
How can I install raspistill/raspicam on a distro that doesn't include them?
0
I installed GUI programs, but no shortcuts were added—how can I execute them?
0
Pi 3A+ doesn't boot past rc-local.service - how can I fix this on Windows?
0
Can you only flash an image to a micro sd once? "error reading from storage. sd card may be broken."
5
How can I factory reset my Raspberry Pi 4 model B?