How to remove thermometer in Raspbian 8 jessie PIXEL

I am using a raspberry pi 3 with raspbian 8 jessie (pixel). I have chromium running in kiosk mode but I noticed that the thermometer appears on the top right of the screen to indicate that the PI is running hot.

I don't think that should be happening. There is an explanation of the thermometer icon here updated last month, and it says it comes on halfway at 80°C, when the CPU should begin throttling due to overheating. 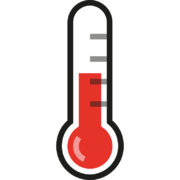 Then at 85°C it changes to a full thermometer. However, that is the maximum recommended operating temperature.

The Pi should not be getting that hot unless you are overclocking it or running it in an unusual environment.

You can get the exact current tempterature with:

Maxing out all four cores on a Pi 3 for several minutes, I have not seen it go over 60°C. Admittedly this is without making significant use of the GPU, but I still do not think it should get anywhere close to overheating unless defective or abused.

You could get a heatsink, etc., but it is possible to go far enough down this road to mask the real issue. I have a couple of defective MCUs (not Pis, fortunately) that when plugged in, immediately begin to heat up until they are too hot to touch, even when they are not being used for anything. By attaching a heatsink and a fast, 9-12V fan inside a ventilated enclosure, I can keep the temperature stable enough to use them (i.e., so they do burn themselves out -- a normal microchip should not be too hot to touch), but this is not how they were intended to be used; the reason I have two is the second one was a replacement from the distributor, who admitted the manufacturer said it should never rise over 45°C. Which is no where close to "too hot to touch". After the second one turned out the same way I gave up on replacements, they are < $10 items anyway.

Point being, you might be able to "solve" the problem by cooling but first you should check how bad the problem is. Install htop (apt install htop) and run it in a terminal so you can see exactly what your processor core usage is.

Let the pi sit at around idle for a few minutes; with a GUI going and no web browser open, etc., one core or another may constantly blip up halfway, but at least three of them should be at <= 10% usage. If it is significantly more than this you need to figure that out.

If, after idling for a minute or so, vcgencmd measure_temp command says anything more than 50°C with no heatsink or fan, there is something even more wrong and the Pi may be damaged or defective.

If the thermometer icon comes on but vcgencmd reports a normal operating temperature (really, that shouldn't be more than 45°C at idle), there is probably just a glitch with the GUI. Apparently it can be disabled by adding:

I just had a half thermometer while Kodi was doing a large scan of a gigabyte size video library on a usb drive. I have a heatsink installed. I removed the cover on the case, blew onto the heatsink a few times and the thermometer disappeared... I left the cover off for the rest of the scan and the thermometer did not return... I suppose one could consider a well ventilated case. I would not like to run a fan, I like the simplicity of the Pi, nothing mechanical that makes noise and wears out...

Not the answer you're looking for? Browse other questions tagged raspbian-jessie temperature pixel or ask your own question.