I'm doing a feasibility study for automating the lighting in our house (eg. with Home Kit), while keeping the existing light switches fully functional.

With regular switches, that would be tough, however, we already have a centralised, yet analogue system: Several dozens of low voltage push buttons with indicator leds are spread across the house. These are all physically wired to latching (bi-stable) relays in the central fuse box (this type). So with a short button push, a low voltage pulse is sent to the relay, which will make it flip state and holds that. Multiple buttons can be wired in parallel to the same relay. The relays are bi-polar, so that all corresponding indicator lights follow the state of the light.

To add automation on top of the existing functionality, I suppose we would need to replace the latching relays in the fusebox by a multi-relay raspberry pi system. It must be controlled both from HomeKit commands, as well as from physical push buttons. The relays would also have to bi-polar to control both the lights and the indicator leds.

To me it seems a lot easier to connect the pi outside your existing relay - essentially making the pi work as just another switch in parallel with the other ones on the circuit you want to control.

This way you can use your existing bi-polar relay board.

This will save you the trouble of operating high-voltage circuits as well.

Circuit that use the system of low voltage push buttons and latching relays usually come with a transformer or small power supply, e.g. 5V DC or 12V DC (but other voltages are also not uncommon such as 24V as pointed out by the edited question). There are also models available with low or high pulse trigger, that is, the push buttons are either providing a contact to GND or to the control voltage. It is necessary to determine this before proceeding to wire some additional circuit in parallel to it.

A simple solution is to have the Pi trigger the relay in parallel to the existing push buttons as Bex' answer describes but with a transistor to accomodate for the differing voltage levels of relay and Pi.

Assuming the relay uses a "high pulse trigger" as suggested by the added schematics in the question a high side switch is required to simulate this pulse with the Pi. This question at EE.SE shows how to do it. The node "6V" is replaced with your +24V, "GPIO" is your Pi's output pin, and the node "IC Vdd pin" goes to the relay in parallel with the push buttons - though I am pondering whether an additional diode in series is necessary to decouple this circuit from any feedback if the push buttons are pressed. 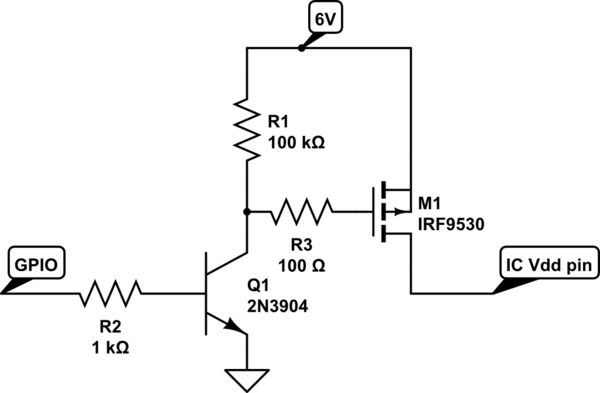 If the relay would use a "low pulse trigger" an open-collector transistor could look similar to this - wiring the collector to the input of the latching relay in parallel to the push buttons.

Reading back the status of the indicator LEDs could be as easy as placing a pull-up resistor in parallel to the LEDs (between the terminal of the relay and +24V), e.g. R1 = 47kOhm (higher than listed in the example due to the higher supply voltage), and connect via another resistor to the Pi's input GPIO pin (as pictured here). 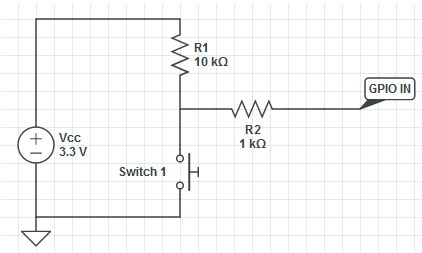 Thank you Bex and Ghanima for the suggestions. You motivated me to keep experimenting until it worked. The question got >1000 views so I better share my working design:

First a correction: The indicator leds and latching relays are actually on 24V alternating current. This added some extra complexity.

To read the 24VAC signal that was meant for the indicator LED's, I used a diode and capacitor to rectify and smoothen somewhat. The resulting DC signal triggers an optocoupler which drives the GPIO input pin.

To send pulses to the latching relays: The GPIO output pin drives a transistor, which creates enough current to trigger a small relay which can switch the 24VAC.

Thanks to the optocoupler and small relay, the microcontroller is galvanically isolated from the outside world.

In the end I didn't use a raspberry, but an ESP32 microcontroller. This one has enough pins to control 12 lights. And with MaximKulkin's HomeKit implementation and some custom code, I could integrate with HomeKit over WiFi.

Now I can control 12 lights from my phone/tablet but also still from all the existing wall switches.

(see here for a short demo).

Not the answer you're looking for? Browse other questions tagged home-automation relay ios or ask your own question.