I understand there is a 5v rail and I am thinking that linking the 5v rails together might work.

I think the 5v rail bypasses the protection circuitry but that shouldn't be needed since the first Pi will be plugged in via USB.

You may not blow anything up, but it is still not a good idea. The Pi-3 has a 2.5 amp polyfuse which means that those 2.5 amps would need to be shared between the 2 Pi's. A quick look around this site will turn up dozens if not hundreds of questions related to under powering the Pi and the hard to troubleshoot issues that result (e.g WiFi not working, SD card corruption etc.).

I think as per the other answers this is feasible in theory, but may not work out well in practice.

I'm reproducing this graph from an article in our blog, Exploring the 3.3V Rail (thanks PM). Note that this graph shouldn't be considered definitive (keep reading): 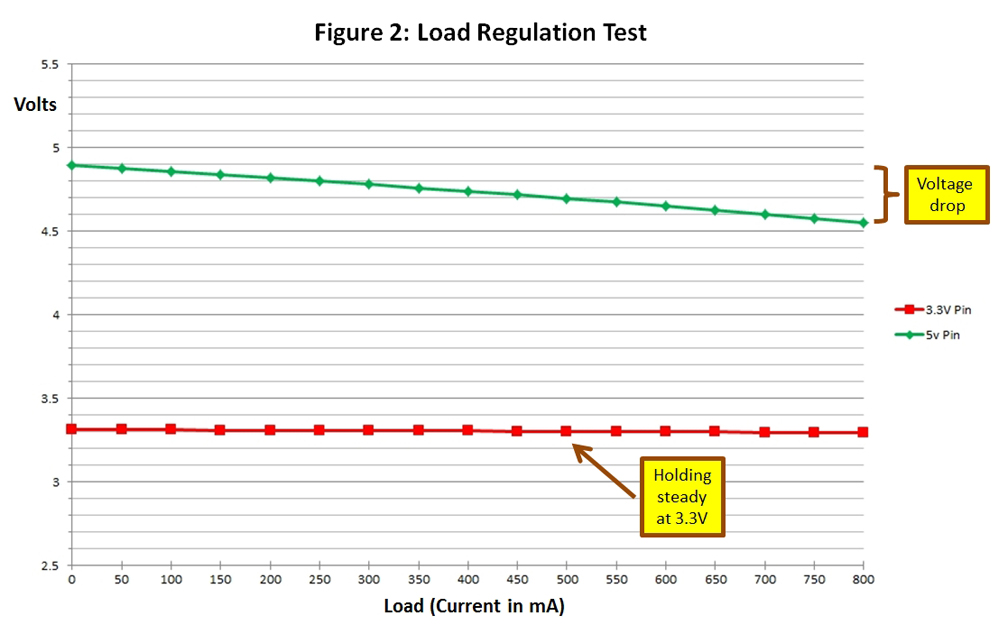 Simple enough -- the green line is the 5V rail, tested via the breakout. The load is additional, i.e., sunk via a pin, and the Pi itself (actually a B+) is headless and idle. Part of what this illustrates is the 5V rail isn't as well regulated as the 3.3V rail (it isn't regulated at all, in fact, beyond some overcurrent/overvoltage protection on the microUSB jack).

If you look around, I think you will find a Pi 3 needs nominally ~450 mA to operate properly, because it will draw that much when the processor revs up high enough. Based on the graph, if the rail were providing an even 5V, at 450 mA it is going to drop to 4.6V -- not so good. At that point you run the risk of Pi #2 cutting out (or both, since as per Steve's comment the voltages will probably match up).

Why that drop occurs is debatable (see comments below) and maybe somewhat inevitable (due to "some 5V components [being] subject to changes in resistance and conductivity under load"), or may be in large part because a linear supply is used (for which "the voltage provided...will vary with changes in load impedance", which has been frequently observed by users here particularly WRT the greedy Pi 3).

I.e., YMMV -- but it should be easy enough to check your own scenario with a cheap multimeter. Just busy loop (x4) Pi #2 and see what happens.

You won't blow anything up -- if you try hard, you could possibly trip the polyfuse on the first Pi. How wise that is or how often you should do it I don't know, but I would stop after round 1 and think about where all the draw is.

However, done sanely that is unlikely, and the worst thing that could happen to the second Pi is it intermittently reboots due to voltage drop. This could cause filesystem corruption, but not physical damage.

This is not how electronics works. Just think about it. Look at your light on your ceiling.

Is that light daisy chained to your bedroom light or lounge light?? Nope!Why? Because there is something called like a Common Rail that provided 220v/110v to the a single outlet / fitting which is also fused up and marked well. And that fuse is powered by another common rail that comes out of the street.. and that common rail is powered by another common rail.. yea you get it now... (also each house has it own common rail.. we are not daisy chained with our neighbors, not even in Brazil)

Common Rail in your application is to have a nice power supply, like a 10A Switching Power supply (50Watt) - Get a good decent cable of 1mm core and then use that to power all your Pi's, USB Hubs, Touch Screens ...

Daisy chaining as you wish to do it never ends well.. or in any electronics application.

You will have to make sure the power supply of the first Pi provides enough current for both Pis and peripherals, without exceeding the maximum intake of the first Pi, this is not a huge range.

See the documentation page and FAQ for typical current draw.

No, this will not go well. The Pi has a limit on the power it can pass, as well as a requirement on how much power is needed to function. This means that if one Pi, powered via USB, needs even just 1.5A, you won't have enough power left for a second Pi.

When I ran a Pi 3 on 2.0 amps, it ran, but I got the lightning bold on the upper right corner telling me it was under powered. When I used a a 2.5 amp adapter, that lightning bolt went away and everything worked. When I tried to run the Pi 3 from a 1.0 amp adapter, it booted up, but stopped after 3 seconds. I don't think the Pi 3 could power another Pi 3.

I can say with absolute certainty, that you should never do that, because I have tried it. It completely bricked the Pi that got power from a Pi. When I hooked it up, it seemed to turn on and off several times due to being under powered. After a short while, the green diode that signifies activity turned off for the last time.

A friend and I have made several attempts to get the Pi back to life, but without success. It is quite dead. Only the red power-light is on when it is powered and it is impossible to install anything on it.

Not the answer you're looking for? Browse other questions tagged power-supply or ask your own question.

25
Power RPi from same Powered USB hub as its Peripherals?
4
How to supply redundant power to a Raspberry Pi from two PC usb ports?
16
What's the problem with backfeeding?
3
Connecting WS2801 LED strip to my Raspberry Pi
1
Powering a RPi with +24VDC for an industrial application
1
How to power Raspberry Pi from a lab power supply via USB?
5
Is it safe to power my external hard drive with a Raspberry Pi 3 B+ USB port?
3
Should I tear apart USB PSU or get a dedicated switching PSU?