Why is Deluge so unstable on my Raspberry Pi 3?

So first, some background information about what has happened so far.

I've been struggling to get this thing working stable for a while now and haven't had much luck on my RPI 3. It's Wired in via Ethernet directly into the Router, and has a direct link to the internet of 50/50 Mbps down and up (rock solid connection, not the problem). I know that there are some similar questions floating around here but none seem to really match the symptoms I'm experiencing or I've noticed that I'm having mixed symptoms from the various threads on the internet.

Anyways, I was trying to make my Pi a 24/7 seedbox for Various Linux-y torrents since I couldn't keep my regular PC running all night

So in the very beginning, I had my Pi setup as a small Plex Media Server with my Media library in the SD card. Anyways, I started out by following the How To Geek guide which seems like is what most people start with, and because it seemed simplest. I had a simple 16GB (Fat32) flash drive plugged into one of the USB 2.0 ports of the Pi 3. (which is recognized as a local HDD everywhere for some reason) that I had mounted to /media/USBHDD1. Following the guide was easy enough, and I made these directories with the following:

I continued following the tutorial (all with the user still being the default user "Pi" over SSH) to set it up as a remote connection to my main PC to monitor torrents as the guide had shown. I had no problems setting anything up until I realized that neither Deluged nor any other remote program (like FileZilla) could access nor write to those directories, with a "Permission denied" error since that was owned by the 'root' user (Chown (Operation not Permitted), chmod, etc also didn't work at giving 'pi' user control). I just decided to make new directories on the MicroSD card in /home/pi/Downloads/... and that seemed to clear up all of the permission issues.

Now, Deluged is running fine and all except when it doesn't. It constantly disconnects at completely random intervals. Sometimes deluged just crashes, so I setup a cron job to constantly check if it's dead every 2 minutes, as some people suggested. Well, Deluged is also giving me extremely variable speeds that seem to start out high at near max bandwidth (I have 6 MB/s) and then dip to practically 0. This is usually about the time that the above problem occurs, or when Deluged freezes for 5 minutes (not updating speed). The problem is that although sometimes only Deluge dies, sometimes my Pi just completely refuses control at all (rarely happens though). SSH stops working, frozen at random points of the connection process, VNC doesn't ever auth/connect, my Plex server dies, Filezilla stops connecting, and as already mentioned, Deluge on W10 disconnects from the Pi connection, appearing offline: 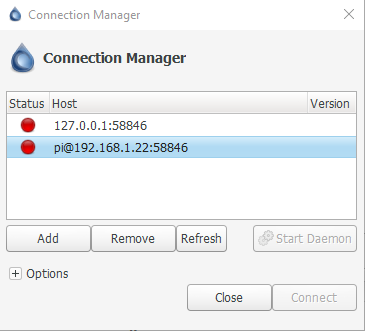 The Pi itself seems perfectly fine with low resource usage in the Task Manager. After I do manage to re-control the pi by physically rebooting it at it's location (I hate doing this as it is headless in an awkward location to plug a mouse/keyboard to) and restart the deluge manually form the command line in SSH, everything works all right until either this or Deluge crashes again. The strange part is although I followed the above tutorial exactly, it doesn't seem to relaunch Deluge correctly upon start up, forcing my to manually kill it with

and then start it up again with

Tolerable but still quite annoying. Anyways, does anyone know why my Pi 3 is doing this? It's a fresh Raspbian install and the IP is set to 192.168.1.22 and although I'm not sure how it's set to that (I think I made it static) but my router has never changed it's IP so that's never been a problem anyways. Other things I've tried so far are:

I've also tried various "troubleshooting" things others tried which hadn't worked for me like updating Deluged to 3.1.13 (latest) which didn't change anything, disabled encryption, etc... As you can see I'm at a complete loss of what is giving me all of these problems when everyone else seems to have way less issues. My ISP isn't throttling data and all of the above only happen on the Pi.

One last thing I should mention is that after all of that I tried to setup Transmission, which didn't work as the rpc-whitelist in the settings.json wouldn't actually whitelist any IP's but that's a problem for another day. Any help would be really appreciated.

I use Deluge as my torrent box, and one thing that helps me is limiting the number of connections, per torrent as 100, and number of active torrents as 3. So total 300 connections as max. I had 500 at time and my rpi2 crashed, so 300 max connections looks okay to me. So limiting your connections may help. Of course I have 75Mbps connection, and wired connection with router as yours, however I have never seen more than 4MBps speed. But that's okay, as RPI runs 24/7 and my wait is just a little longer. If I need things immediately I can use my Laptop.

Have you tried using transmission instead? I was getting the same issues as you before I switched over to transmission, possibly because it's much less memory intensive. For me a simple: sudo apt-get install transmission-daemon worked and there are plenty of tutorials online about how to setup and optimize transmission for the raspberry pi. I have it setup on my pi 2 and it often sees speeds of 1MBs over wireless, furthermore the upload speed doesn't oscillate as randomly.

My pi torrent box has been running for four months now without any problems (:

Not the answer you're looking for? Browse other questions tagged networking ssh deluge or ask your own question.