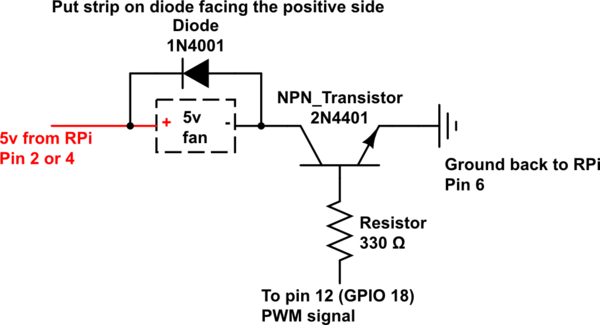 Many of the other Answers were correct at the time, BUT the kernel now includes temperature control capabilities.
Only a single line needs to be added to cmdline.txt

This uses the gpio-fan overlay (which has been available in the kernel since late 2018) and should be included in recent versions of Raspbian. (Read /boot/overlays/README for description of this and other Device Tree overlays.)

1
Automating my fan based off of the CPU temperature
3
Control USB fan via relay
8
Cooling fan powered directly from GPIO?
1
Controlling fan of the LABISTS Raspberry Pi4
0
How to read any connected DS18B20 temperature sensors with C/C++
0
is it possible to control the Fan from GPIO?
0
Lower temperature for GPIO fan turning on