Can't connect my RPi to internet via ethernet cable

The same cable when connected with my Mac works perfectly but when connected to my Raspberry Pi 3 model b i can't connect to internet. This is the new output of the ifconfig:

I changed interfaces file and now looks like this 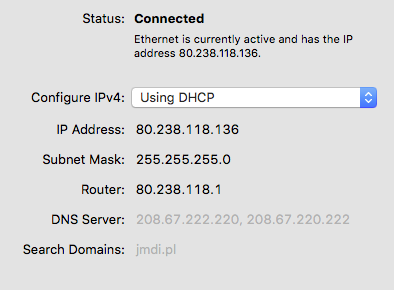 Your interface configuration file (/etc/network/interfaces/) tells me that your Ethernet interface eth0 is set to manual rather than to communicate with a DHCP server to obtain an IP address, which is what you want your Pi to do. Your interfaces file looked like this:

Remove the line iface eth0 inet manual and add at least these two lines to your interfaces configuration file:

auto eth0: This line will attempt to bring your Ethernet interface up when your Raspberry Pi boots.

You may also consider adding this line to your interfaces file:

allow-hotplug eth0: This line attempts to bring up your Ethernet interface when a hotplug event (i.e. an Ethernet cable is plugged in) occurs.

A detailed description of many, if not all, parameters that may be entered in your interfaces file can be found here.

Not the answer you're looking for? Browse other questions tagged networking ethernet internet or ask your own question.

257
How do I set up networking/WiFi/static IP address?