I want to make a circuit where I can control 2 LED's with one GPIO pin. But my question is if this would be possible and/or harm the Raspberry Pi because of the negative flow? Is there another way or should I just use 2 GPIO pins? 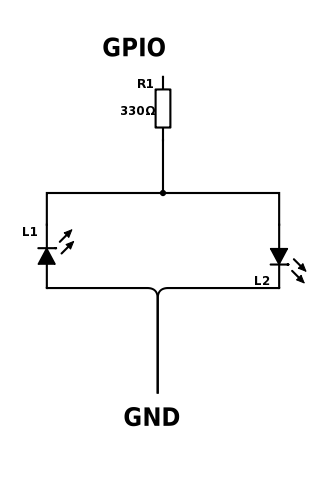 gpio electronics
Share
Improve this question
edited May 1 '17 at 14:58

As shown this circuit cannot drive two LEDs the way you want it.

There are however ways to do what you want. This tutorial (source of the figures shown below) has it outlined quite nicely. The circuit looks like this (see last paragraph on the missing current limiting resistor in these schematics, add resistor at your own discretion):

Setting the GPIO to input turns off both LEDs. GPIO output, switching high/low turns on either one of them.

It is however noteworthy that it will only work if the sum of the forward voltages of the LEDs is higher than the supply voltage (tricks to work around that are in the linked page). Depending on the forward voltages and the supply voltage it is also possible that both LEDs will light up dimmly even if they're not supposed to be on. That is an unfortunate side effect of the strongly non-linear current-voltage characteristics of a LED. At voltages well below their rated forward voltage a small current is still flowing and thus a dim light can be observed.

It also requires the forward voltage of each LED to be less than the voltage level of GPIO high (i.e. it will likely not work with white LEDs).

It also relies on the fact that the current is limited by the GPIO pin itself (one may or may not choose to go with that assumption). If in doubt use a series resistor at the GPIO pin (see final figure, just skip the additional diodes if working with 3.3V at the Pi).

Not the answer you're looking for? Browse other questions tagged gpio electronics or ask your own question.

1
Is it harmful to write to a GPIO pin when there is nothing hooked up?
5
I need to control 8 LED's but I can only control 3? [helpful pictures attached]
1
GPIO Output Backwards
0
Why GPIO 9 and 10 Cannot Light LED? MOSI and MISO
0
Use a single GPIO pin to activate both LED and buzzer
0
help reconstructing blinking LED circuit that required GPIO #17 pin low rather than high
1
Can I connect 3V3 to GPIO output pin?
1
Connecting an output pin to an input pin
0
Controlling a led button and receiving input from that button