I'm a complete beginner attempting to build a basic circuit using a MOSFET to trigger a 24V push-pull solenoid from a Raspberry Pi's 3v3 GPIO pin.

I had someone else outline a circuit that I could use using the 3v3 GPIO output to toggle the MOSFET.

This is the circuit I'm currently using that works using the following parts: 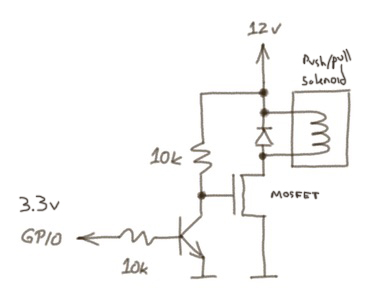 So my main question, is there a way to build a circuit where the solenoid is OFF by default, and only triggered ON quickly when a 3.3v GPIO signal is detected?

Also, is using a MOSFET an ideal solution for using the GPIO on the Raspberry Pi, or is there a simpler way I could be turning my 24v Solenoid on and off using Raspberry Pi? As a beginner, I can't seem to find a simple, straight-forward answer to toggling a solenoid using 3v3 GPIO pins!

Here's an answer based on my basic understanding of MOSFETs and learnings building this circuit.

The MOSFET I'm using doesn't fully turn with 3.3V applied to the GATE. Even though the data sheet says it only needs 2V, it actually works best with 5V.

So instead, we can address the issue by introducing an NPN transistor to operate at the lower 3.3V, and leverage the 24V current to trigger the MOSFET gate instead.

Here's the final circuit that worked for me:
I went ahead and labeled all the major components to help other beginners out there :) 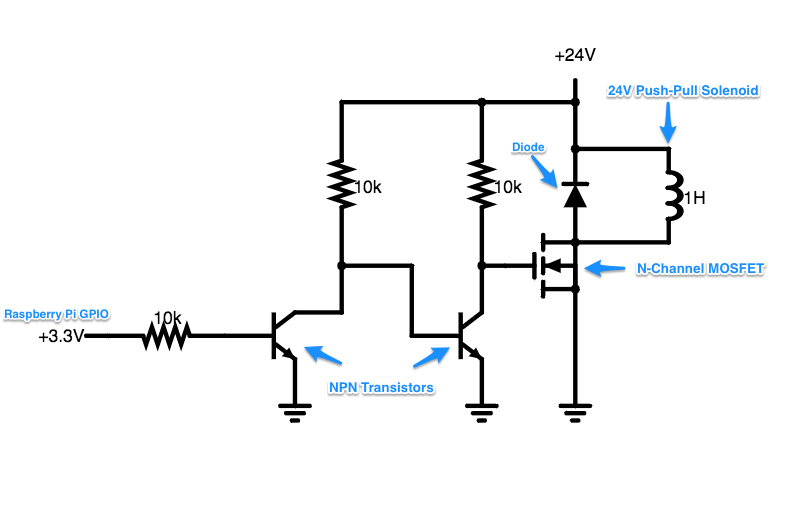 I ended up using 2 Transistors, because I wanted the initial state of my circuit to be OFF (this is shown in the gif below)

To get a better idea of how this circuit works, you can play with it here. (Drag the GPIO Voltage slider on the right from on to off)

As you can see from above, the following is happening when 3.3V is switched between ON and OFF.

The diode used in the circuit is added to prevent a voltage spike from traveling the wrong direction into the circuit, thus frying the GPIO or other components. When the solenoid snaps back, it pushes current back through the wires, and the diode forces that current to loop back through the positive channel (since diodes only allow current to flow in one direction).

Many thanks to Mike at Adafruit for help with this circuit.

I can't imagine why you would want to use a transistor to drive a MOSFET.

Basically the circuit as printed is doing exactly what you would expect. Just use the MOSFET, assuming it is a device intended to run from 3.3V. See http://elinux.org/RPi_GPIO_Interface_Circuits

NOTE by default most Pi pins are inputs, some with pullup. This may cause a MOSFET to turn on. You should select one with pulldown. See http://www.panu.it/raspberry/

The Mosfet has a Vgs of 2 volts, this means that the 3.3 volts should be able to turn it on. The Rds is very small, so the Mosfet should never get hot. The Solenoid may get hot depending on the coil resistance, we need to know the DC resistance rating. The NPN transistor should never get hot, the 10K should limit current to about 1.2mA. The gate current will be around 300 uA, just enough to turn it on ok if we assume minimum Beta of 50. Double check that the 10k resistors are really that value. A 1 Meg resistor from the Mosfet gate to to ground will keep the solenoid off even the the pins are inputs. The only thing the NPN is doing is inverting the control logic, you could probably eliminate it and just drive the Mosfet.

4
How to break a 5v circuit using raspberry pi
2
Simple DC Solenoid Valve Circuit, How to size components?
0
Controlling a Solenoid With GPIO Output Using a Transistor
4
How To Switch On/Off A Circuit using GPIO
3
Switching a Circuit on/off with a MOSFET
3
Connecting a 24v appliance(solenoid) to Raspberry Pi
2
How to control 12V DC motor with a NPN transistor, a GPIO pin and a 12 V DC power supply
1
USB Fan doesn't work with transistor - Raspberry pi 3