Can I extend the green led on the pi 3 by soldering wire and led from the same spot or do I still need to add a diode or something? Sorry for the noob question

If you have to ask this question you almost certainly do not have the tools to perform this task, which would be a bad idea. Putting LEDS in parallel seldom works, and it would be a difficult task.

Instead I suggest you use a LED connected to a GPIO.

Just a short walkthrough based on Milliways' answer for raspbian buster (2021): 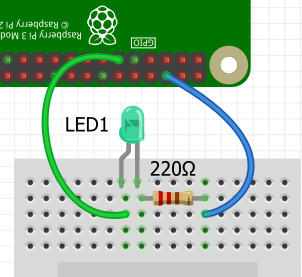 Not the answer you're looking for? Browse other questions tagged pi-3 led or ask your own question.

6
Connecting blue LED (3.3V)
1
extend the current for PWM LED Control
1
Pi is not working properly red led not glowing and green led blinking
1
Can't get Raspberry Pi to Control LED Lights
1
Raspberry PI + DS1820 + Led. Resistor confusion (series or parallel?)
0
Use a single GPIO pin to activate both LED and buzzer
0
anode RGB LED to raspberry Pi
2
Whole control the green led on RPI 3B+
0
Green LED always on, but everything seems to be normal?