I've tried to imitate the below diagram for my Raspberry Pi using GPIO 0, without a receiver.

The diagram seems to show a resistor going to ground, and an (emitter?) going to ground as well. I know nothing about electronics (as you can tell), but I wired it together using this diagram. [this is one I made from the above one...] 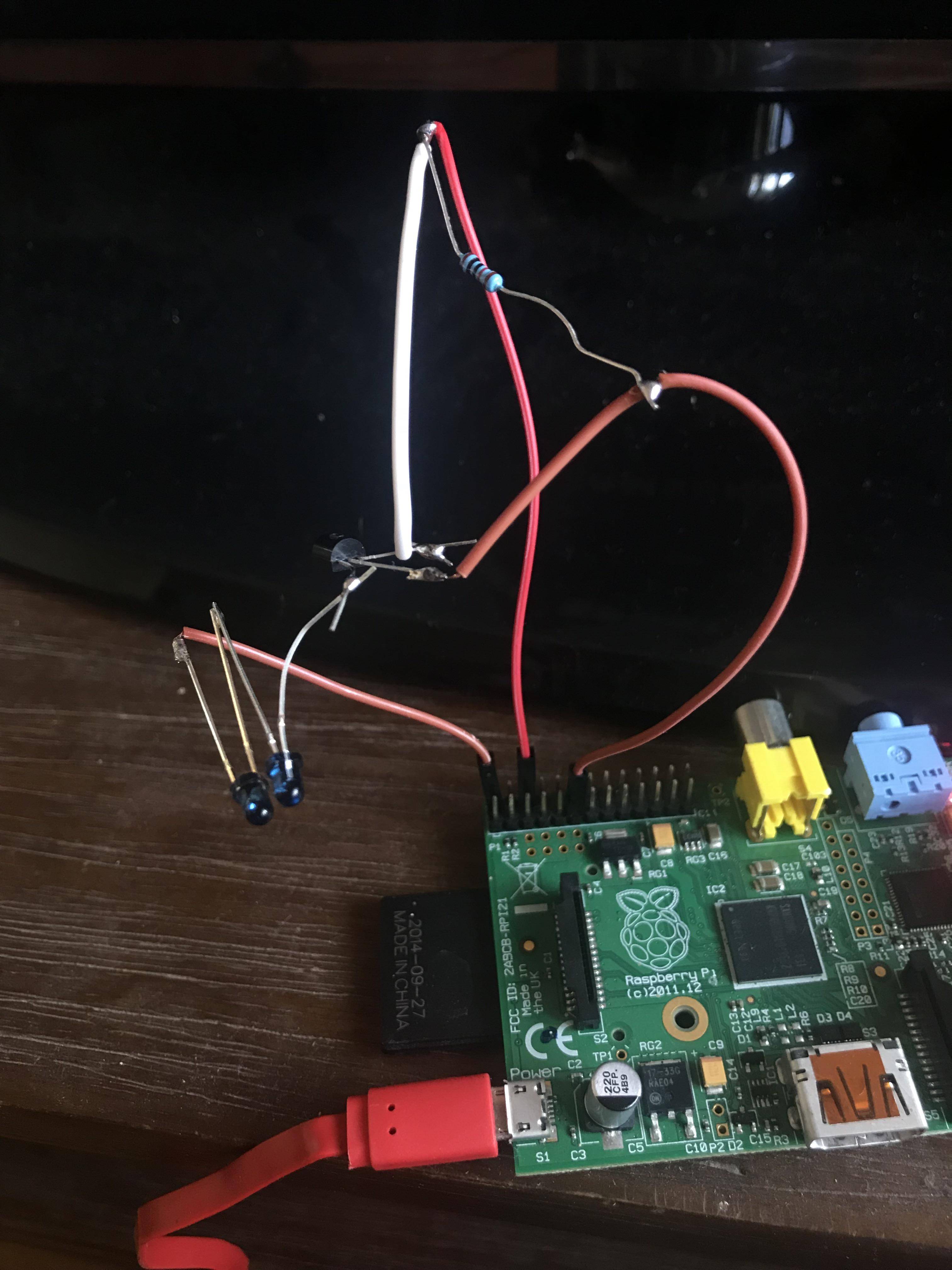 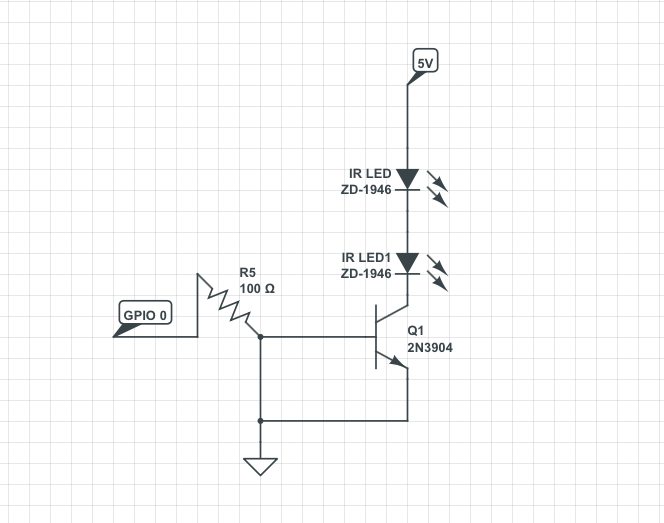 Is my wiring attempt ok?

EDIT: I ran a modified version, where I connected the base to the 10k resistor and then straight to GPIO 0, and the collector to ground, with the LEDs connected to 5v. The LEDs are now constantly lit.

SIDE-NOTE: Generally, I've been incredibly confused with the posts online with regards to the correct amps, voltage from the Pi — 3.3v, but don't know enough electronics to know if the LEDs will demand a certain current, or receive it regardless (which makes it hard for me to determine what the resistors are for).

No, this is one figure sometimes floated as a total maximum for all GPIO pins. Note the pure 3.3V/5V power pins are not considered GPIOs and can supply much more than this, perhaps 1 A in total. In the picture you are using a 5V pin, which should be fine.

I've routinely drawn 100-150 mA total without issues (but YMMV!). The limit per pin is usually (and I believe officially) given as 16 mA, but again from experience and observations by others here, 20-25 mA should be okay. In this case you are only using a GPIO to toggle the transistor, which can be done with a few mA or less.

There should really also be a resistor somewhere between the power pin and the LEDs or the LEDs and the transistor. The LEDs have a forward voltage drop of 1.3V and there are two in series = 2.6V. So that resistor should be about: 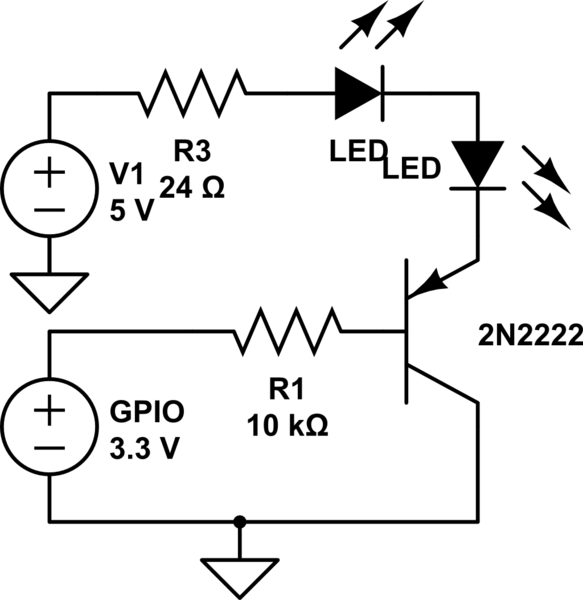 Note the connection to ground from "GPIO 3.3V" does not mean you need to add that connection -- the pin is only the + aspect of the voltage source there, the other part is abstract.

A 2N2222 is an NPN transistor. What you have drawn is a PNP. If you are using a 2N2222, connect the emitter to ground and the collector to the cathode side of your LED.

You have a better option to use a MOSFET

BJT in this case is less suitable because you are driving LEDs in Digital mode. LED brightness is of no concern; only on or off condition is needed.

@SRD is correct that the "Accepted" answer has the transistor in wrong orientation. 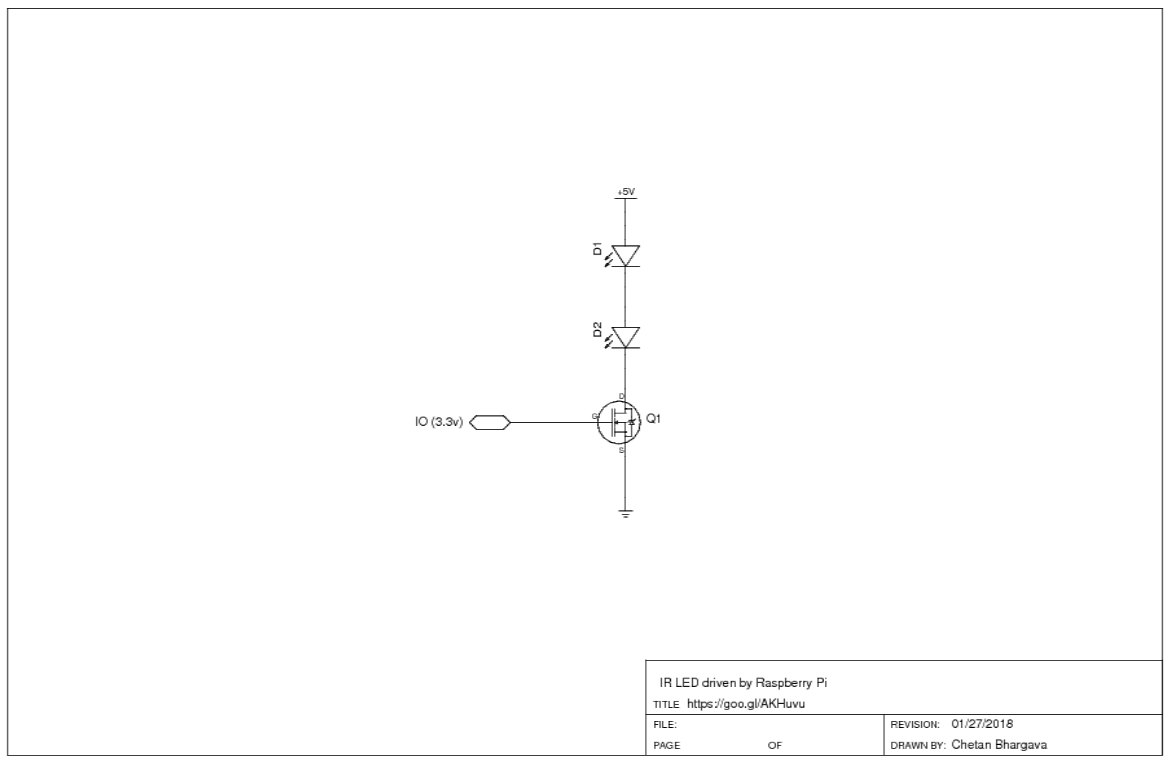 Not the answer you're looking for? Browse other questions tagged gpio led lirc or ask your own question.

2
battery power for RPI and IR LED bank?
0
GPIO pin - possible floating voltage when used with a transistor
0
5V LED Strip Wiring Help for Raspberry Pi 3
2
How to control 12V DC motor with a NPN transistor, a GPIO pin and a 12 V DC power supply
0
How to choose appropriate transistor and resistor values for the 4 digit display?
3
GPIO pin wiring for LEDs and their resistors
3
Neopixel lights do not change color