Is it possible to power a Raspberry Pi (Zero/Compute Module) over an HDMI/MHL socket of a TV?

Today I stumbled upon the WDLabs Media Stick for the Raspberry Pi Compute Module at the ModMyPi Online Store and was immediately reminded of the Intel Compute Sticks or the ASUS Stick PCs.

But the WDLabs Media Stick doesn't seem to be powered over HDMI as it still needs a 5V input over a Micro-USB socket according to the (very short) PDF manual.

There is an rather old thread on this topic on the Raspberry Pi forums which says it's impossible. But given some of the comments in there about e.g. the MHL standard and the fact that the Raspberry Pi Zero didn't exist back then, I expect that most information in that thread is outdated. Also the claim that HDMI sinks can only provide about 50mA (which is about the amount of power two keyboard LEDs consume) seems to invalidated by the pure existence of the Intel Compute Stick. But another not so old thread on Quora comes to the same conclusion: HDMI only offers 50mA.

Or is maybe my assumption wrong that the Intel Compute Stick and similar devices are powered over the HDMI port? Because they're usually advertised as "just plug it into an HDMI TV or monitor and start working" which suggests that no additional power supply is necessary.

So in theory it should be possible to power even an Raspberry Pi 2 over an MHL connector if there's an intermediate board which takes care that both HDMI signal and power are connected to the correct sockets or GPIO pins on the Raspberry Pi.

Anyone already did something like that? Or is there already a ready to use board/HAT/pHAT for that? Actually the ZeroStem follows a similar idea, just with USB instead of HDMI, i.e. making a USB stick out of the Raspberry Pi Zero.

At least the thought of having a Rasperry Pi Zero W with a Bluetooth keyboard and mouse which just connects to the MHL-enabled HDMI port (and really nothing else ;-) of a TV to start working sounds like a really nice setup.

Sorry, but it's not possible. Maybe future HDMI standards could implement this, but not now. I guess we'll start using USB-C sooner.

As for the Intel Compute Stick, if You see the images explaining external ports, You'll clearly see that there is a Power port (micro USB) as well. 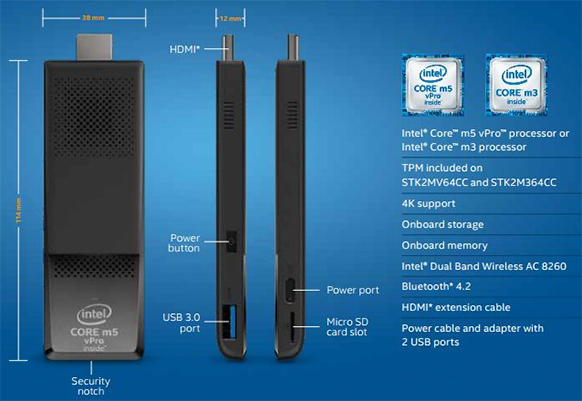 The Intel® Compute Stick is designed to use up to 10W of power. USB ports on televisions or monitors don't supply enough power for the Intel Compute Stick.

So they advertise it as plug-and-play because they might be powered only by USB sockets from the TV. But apparently not many TV's provide sufficient current to power up anything bigger than USB flash drive.

And just a few words regarding MHL adapter. I actually own one of them and they have to be externally powered as well.

It's not supposed to be possible, if you look at the specs.

However, I've managed to do something similar, to some degree, with a Raspberry Pi 2/3 and a cheap HDMI to VGA converter. If I power the converter but not the Pi, the Pi seems to boot and/or not power off. The Pi's power LED illuminates, and if the Pi was already powered, stays on. I'm sure an enterprising hardware hacker could use that information to hack something together.

I was quite surprised when I discovered it. More than likely, there's an issue with diodes (or lack thereof) and hot plug (HDMI Pin 19) at work to cause some kind of power backfeeding. I'd hazard a guess and say that on the Pi, somehow HDMI Pin 19 is connected to the 5V rail. Hot plug is meant to carry ~50ma, which is enough to power up the HDMI chip (or a few low-power LEDs). It's only intended to power up the HDMI chip to let the source or display know that the other is present. Therefore, most displays won't source more than 50ma. The Pi usually draws from 500 - 1,000 ma, up to 2,500ma, depending on the model Pi you're using. Even if you rigged up some hardware, the HDMI pin is probably not rated for it, and you still have to have an adapter from USB somewhere.

For my use case, OSMC, this phenomenon was a detrimental effect. I was encountering issues with video playback and wanted to make sure the converter chip had power to it could handle high video rates. I had one adapter without a power in port, and it could not handle converting full motion video well. I have a few that have power in ports, and one of them worked well for me when it was powered (some worked and some didn't). I attribute that to sketchy tolerances or engineering. However, I have to power the devices on in a certain order (Pi, then adapter) to get things to boot properly. The power backfeed is probably still in effect, so I try to keep them on the same power supply.

Not the answer you're looking for? Browse other questions tagged hdmi pi-zero alternative-power compute-module or ask your own question.

6
Replacing Raspberry PI HDMI Port
1
Can the Raspberry Pi Zero be powered by a real usb port?
6
RPi zero ethernet connection via HDMI port using a HDMI to RJ45 adaptor
1
How would one turn on his raspberry over HDMI
2
Price of compute module versus Pi Zero
4
Does the Pi Zero have two OTG USB ports (data over PWR IN)?
0
How to fix broken data microusb on raspberry pi zero