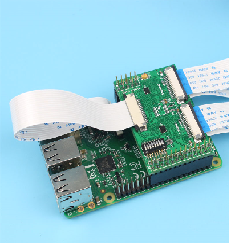 I mounted two cameras to the "Camera A" and "Camera C" ports (on the top of multi camera board). Based on the camera selection configuration, which has been mentioned here, I only need to work with three pins of GPIO(Pin# : 7,11, and 12).

At first, I wanted to make sure both cameras were working separately and simultaneously. So, before using the multi camera adapter board, I checked each camera separately(I mounted them on the raspberry Pi). Both were working correctly.

However, the problem is :

The captured image contains so much noise and artifacts and after showing this, the system would crash).

I would appreciate it if someone would help me. Thank you.

Browse other questions tagged pi-3 camera or ask your own question.