How Do I Wire up Multiple i2c Devices with Different Supply Voltages?

I connected a PN7120 NFC Reader and was able to use it successfully.

I am also able to connect the official Touchscreen display and it works fine.

My problem is when I connect both of them. Right now I have both devices wired to the same SDA and SCL Ports. The display is connected to a 5v pin and the NFC reader is using a 3.3v pin.

I tried powering from the display and jumping the power to the Pi as well as using separate power supplies.

i2c does not need usually conversion, because its an open-drain bus, practically all modern 5V devices understand 3V3 logic. In either case, it is safe to use without any converters in most cases. However, the open drain configuration requires pullup resistors.

The operating voltage of i2c bus is set by a pullup resistor. Proper pullups are critical.

Since either device communicates fine on its own, this is likely the cause of your issues. The internal pull-up of raspberry pi will struggle with more devices on the bus. 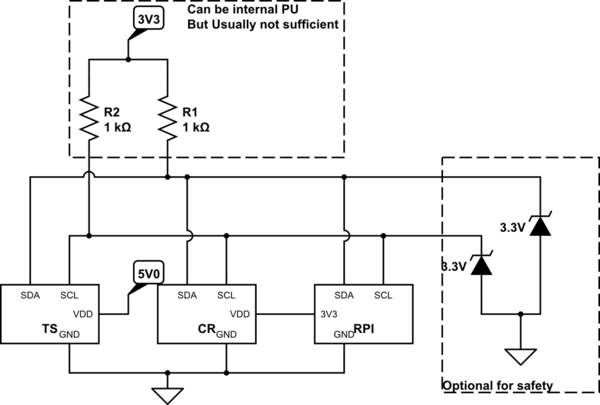 The reason this scheme works with 5V devices is that I2C does not use logic 1= HIGH, logic 0 = LOW but is an open-drain bus. Which means logic 0 = LOW logic 1 = X

So the i2c pins will drive to 0V for logic 0, but only "float" the line for logic 1, with the voltage set by the pull-up resistor attached to the bus.

5V logic is generally sensitive to 3.3V inputs, but this is not always the case, you should always verify with the datasheet of the touch screen, or test empirically. There is a very high probability it will be fine.

The very first CMOS logic devices had high thresholds for 5V, they have been superseded, occasionally you find one in the wild. Most 5V CMOS input devices made in the last 20 years are sensitive enough to respond to 3V3 inputs.

As a slave device there should be never be a condition where the touch screen drives the Bus HIGH, sometimes devices are wonky and terribly designed, so you may want to check. To protect the bus you can insert zener diodes that would clamp the voltage to 3.3V, as shown in the schematic.

NOTE These diodes are required in the opposite configuration with a 5V master with 3V3 slave. Because, for example, there is a good chance that a 5V arduino will drive the bus because of a software bug or mis-wiring and destroy a 3V3 sensor. So in this case the zener clamps are critical to protect your devices.

Using BUS translators can be problematic with an open-drain bus. You have to be careful with selecting an appropriate device that is open-drain outputs and not active drive. There are translator and bus coupler IC's that are i2c aware or have an open-drain topology, but they must be explicitly picked.

i2c uses a simple method to detect bus contention. Since logic 0 = LOW and logic 1 = X, logic 0 "beats" logic 1. If two devices try to communicate on the bus at the exact same time, the first one who tries to write a logic 1 to the bus while the other writes logic 0, will detect that the bus did not change (logic 0 wins in rochambeau) and stop transmitting. If a bus translator is driving logic 1 = 1 and some device tries to use logic 0 = 0, this will cause a short circuit.

If you absolutely have to bridge an isolation barrier, or communicate with multiple devices at different voltage level, you are better off using an i2c extender IC over a simplex active bus like SPI, which can be safely bridged with simple one-directional translators (even opto-isolators will work for low speeds)

Not the answer you're looking for? Browse other questions tagged pi-3 windows-iot or ask your own question.

3
Pi2 does not power up. Is there anything I can do?
1
Why is Windows 10 IoT Dashboard unable to find my Raspberry Pi 2?
0
DS3231 RTC corruption issue @ reboot with raspberry pi3 on 2016-05-27-raspbian-jessie
6
Impossible to scan RFID tags using libnfc, PN532, and RPi3
1
Pi 3 with Windows Creators Update not working with Raspberry Pi Official Display
0
NO display with raspberry Pi.High voltage at 3.3V output.(Is it dead?)
0
Multiple problems with my Raspberry Pi 3