Capture image when camera is not covered

I am very new to R Pi, but I know my Python.

I am working on a project where I have an always running camera, that is kept in dark. What I need to do is to capture an image when there is light. (lets say the pi cam is in a dark box and when somebody opens the box it takes an image about them)

So far I using the code from the basic getting started tutorial.

And it works fine. I have camera feed and it takes an image. I will write around this script.

I know how to make it run forever, also how to start it on turning on the Pi. The only thing I missing: How to know from the camera feed if there is light?

Use an additional photodetector, e.g. a fototransistor, attached to a GPIO pin and detect when there is light.

A simple circuit could look like this (source). With Vcc=3.3 V and Vout tied to a GPIO input pin of the Pi. According to the source the resistor would be 100 Ohms, I would think it should be higher (Adafruit is in the range of 1k to 10k Ohms). Major drawback of this circuit is its analogue signal that is feed into the digital input and might be somewhat less repeatable. 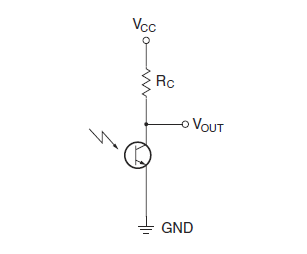 An improved circuit would use a Schmitt-Trigger, either integrated, e.g. the 74HC14, or a circuit like this (source): 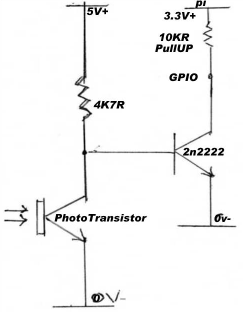 Wait, a camera is essentially a photodetector, why use another one? Simply have the Raspicam taking pictures all the time in an appropriate frame rate. Read the picture, calculate the sum of all pixels. If this value is above a certain threshold assume it's "light" and keep the picture, otherwise discard of it. You will need to figure out that threshold for your particular setup - a dark image will not be zero due to hot pixels and noise.

As an example using numpy/scipy (just because I use those all the time - one could also use any other package that imports images).

Improvement to that would be to not save all the unneeded images to the SD card. Instead use picamera.capture() to capture the image to a file-like object (an io.BytesIO stream) or even better (thanks to Dave Jones) directly to a numpy array. Calculate your result from that object and save only if necessary.

An example from here shows how to do it and gives important notes to the resolution.

Not the answer you're looking for? Browse other questions tagged camera python-3 or ask your own question.

3
PIL.Image from picamera.capture()
2
Execute raspistill from Python
1
How to read RAW Picamera jpeg images in python
0
Phototransistor on RaspPi and python