I was having trouble while booting up my Raspberry Pi powered by LiPo batteries. 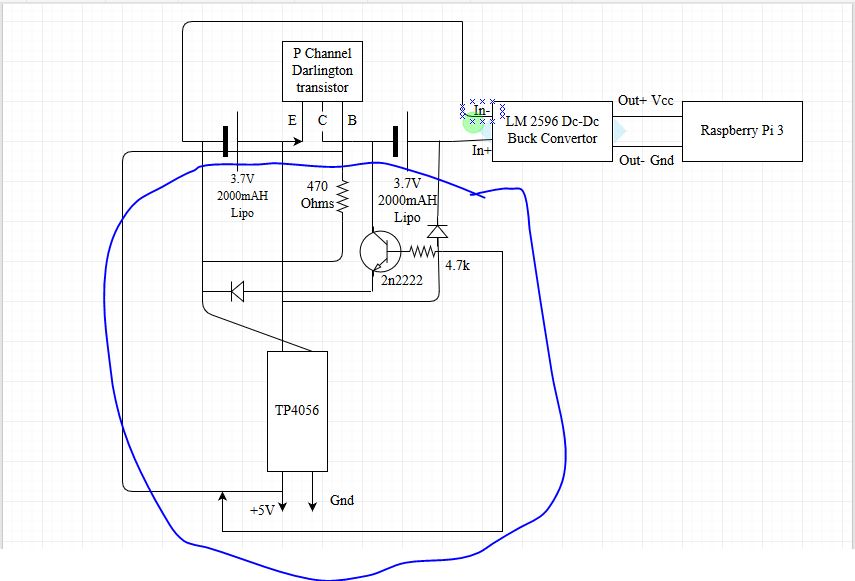 Ignore the components inside the blue circle I am just connecting the batteries, the darlington transistor and the coverter. The darlington transistor is used for switching when the power is connected I am getting 5v from the dc-dc converter, but it is not properly running the rpi. The rpi is running if i neglect the transistor, and connect just the batteries and the converter. I think there is an initial current surge when rpi is connected which either the transistor or the converter is unable to cope up with. Any workaround for this?

If the red PWR led is on solid, no flickering, the power supply is probably okay.

it just blinks its green led

This indicates an issue with the SD card. Have you tried using a normal power supply? Most likely it will do exactly the same thing.

The significance of the blinks is summarised here, although this may vary from one firmware version to another and as far as I am aware the Foundation does not publish anything official about it. But the long and the short is there is something non-viable about your boot partition (anything wrong with the second, root partition would dealt with by the linux kernel, which does not blink anything but outputs to console).

I've powered up a raspberry pi 2 and the official 7" screen with a 3.7V lipo battery and a powerboost 1000C by adafruit successfully without any power issues.

The schematic is available, so you might want to take a look at it.

Not the answer you're looking for? Browse other questions tagged pi-3 boot power-supply electronics battery or ask your own question.