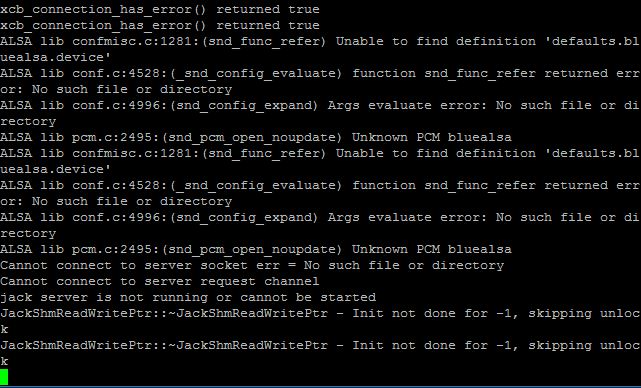 I solved my previous Bluetooth issue, but now my problem is that every time I try to connect something (per Bluetooth) with the Pi Zero W it disconnects very quickly.

If I try to connect it to my PC, everything is fine, but I tried one headset, one mini headset (the stuff for running around outside) and a box and every time it says connected: yes and one moment later connected: no.

So what can I do? (If I run it with GUI it's working perfect but headless and with bluetoothctl it doesn't work).

I had a similar experience: I was trying to play sound over bluetooth with a raspberry pi zero w, on rasbian lite (headless) stretch.

Having read that you should use pulseaudio, since "the bluetooth stack" aka bluez doesn't support ALSA anymore, I saw that the above error message (protocol not available) disappeared whenever I had pulseaudio running, with certain bluetooth modules loaded (module-bluetooth-policy and module-bluetooth-discover), and I was able to connect and maintain the connection as well as use the bluetooth device as an audio sink.

But I couldn't get pulseaudio to run properly when deploying it as a service, neither in system-mode nor in user-mode... finally I gave up, especially since I discovered a project that brings back integration of bluetooth with alsa directly, and which is available in the standard repositories as bluealsa (with stretch!).

So since I unfortunately can't comment, this half answer is saying: If you're using pulseaudio, make sure to start it manually with modules loaded. Otherwise I suggest using bluealsa. And as far as I understand, the error message is telling you that it doesn't know how to handle this A2DP thing, which should give you a clue - have something running that knows how to communicate with devices through the A2DP protocol...

Not the answer you're looking for? Browse other questions tagged bluetooth pi-zero-w or ask your own question.

1
USB Bluetooth dongle shuts down after Bluetooth serial port disconnection?
0
Bluetooth sink has no audio
4
Setup Bluetooth on a pi zero w
2
Pi as Bluetooth headset
0
Is it possible to connect a Raspberry Pi with multiple inertial sensors simultaneously via Bluetooth?