Should I use use `rpi-update` for kernel upgrading on Ubuntu Mate v16.04.3 LTS for RaspBerry Pi 2 B+?

According to the GitHub rpi-update site:

This is only intended for use with Raspbian. If you are using a different distribution then check with the maintainers if using rpi-update is safe.

I have not been able to find any list of Linux distros accepted by rpi-update, nor that compatibility detail on the Ubuntu website.
Can I use rpi-update on Ubuntu Mate? Is it safe?

Reason for doing this:

It's reasonably safe; I've noticed some people saying no one should use rpi-update unless they have a good reason because the kernel is ahead of the standard Raspbian one (and hence, less tested in the field) but I have never had or heard of an actual problem resulting from it.

A potential issue is that Ubuntu updates could then overwrite your newer kernel with an older one, since the practice is to always name these kernel[7].img, regardless of version. I don't use Mate, but I do use ARM distros that aren't intended for the Pi at all and hence install useless things in /boot, creating a similar potential conflict. My solution to that is to mount the first partition on /boot/BOOT instead (this requires editing /etc/fstab); that way the distro can put whatever in /boot, which is now just a regular directory instead of a mount point.

That strategy would make using rpi-update awkward, so I just copy stuff in from a git clone of the firmware repo (which includes everything rpi-update installs: the kernel and modules, firmware and device tree stuff in boot, library stuff in /opt/vc). Alternately, you could instead leave the first partition completely unmounted (the mount serves no purpose except for updating the contents) except for when you want to access it, or run raspi-config -- then you would mount it on /boot, the normal contents of which (the Ubuntu installed stuff) will then be unaccessible, but no harm will befall them. If this is confusing, copy some files into a directory normally used as a mount point, then mount something on it. Notice those files are not there anymore. Unmount and presto -- they are still in the normal directory "underneath" where a device was mounted.

Just remember to unmount after you run the update.

Finally found on the GUI: Welcome --> Info about RaspBerry Pi : the core must, indeed, be updated using rpi-update instead of apt-get.

Here is a capture (sorry, my Ubuntu is in spanish, but I think the sense is understood): 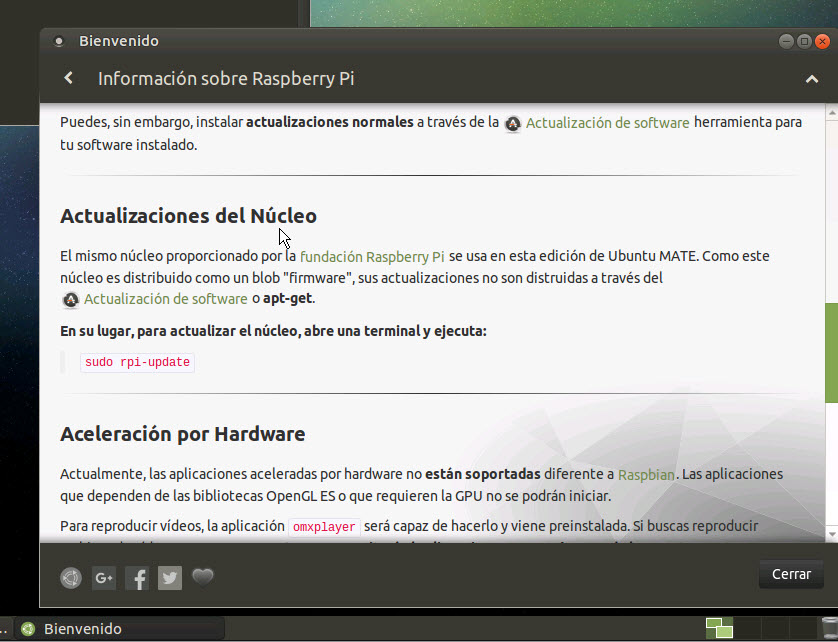 You can run rpi-update but WHY? You are running an old Ubuntu (admittedly LTS) so what do you expect the newer kernel to achieve? (There is little actual difference between 4.4 and 4.9). I note that updating to 17.04 on the Pi has a number of problems, and is effectively unusable.

While Ubuntu MATE once recommended this, they have since provided kernel and firmware updates in the same way as Raspbian, following testing of the complete package.

"In normal circumstances there is NEVER a need to run rpi-update as it always gets you to the leading edge firmware and kernel and because that may be a testing version it could leave your RPi unbootable". https://www.raspberrypi.org/forums/viewtopic.php?p=916911#p916911 Even the rpi-update documentation now warns "Even on Raspbian you should only use this with a good reason. This gets you the latest bleeding edge kernel/firmware."

Not the answer you're looking for? Browse other questions tagged kernel ubuntu update rpi-update or ask your own question.

1
Why did my kernel version rolled back after rpi-update and apt-get update? Should I only use one of them?
0
New kernel doesn't load after rpi-update
0
Check most current RPI-Firmware available from Git Repo?
3
Kernel Panic when launching Ubuntu-Mate 16
2
How to install RealVNC Server on Ubuntu Mate 16.04 LTS?
3
Pending kernel upgrade even after reboot my RPi4