Project: I am creating a light switch panel to control my LIFX WiFi lights. I have 3 buttons hooked up to GPIO pins 6, 20 and 22 and I'm using the GPIO.add_event_detect to capture when the button is pressed.

Problem: My issue is that if I push one button, sometimes it triggers one or more of the other channels. For example pressing button channel 6 will also trigger 20 and/or 22. The odd thing is that it works perfectly fine 80% of the time so I really don't believe its anything physical like signals crossing wires. I've been at this on and off for about 2 weeks.

What I've Tried: Originally I made a little protoboard which I soldered leads to a 40 pin header and I thought that there was a chance a wire was crossing causing this phantom button press. I then bought a $20 board off Amazon that has screw terminals for each GPIO pin... same issue. I tried switching up the GPIO pins I was using to be further apart on the board, in case somehow they were crossing.

I've tried updating the GPIO library but I have the latest.

I've tried different push buttons to see if they where faulty.

I've checked that pressing one button doesnt wiggle the other buttons enough that they trigger.

I've tried using GPIO.input(channel) to see if the button is pressed in the buttonPressed callback but more times than not that makes it so that no buttons are pressed (even the one I actually pressed).

I've tried removing other code for the LIFX lan library and the TCP server that I start.

The buttons are screwed into a piece of wood and have several inches between them so I know wires are not crossing there.

Next I'm going to try swapping to another PI but I have everything screwed down into a cabinet and its difficult to get to. 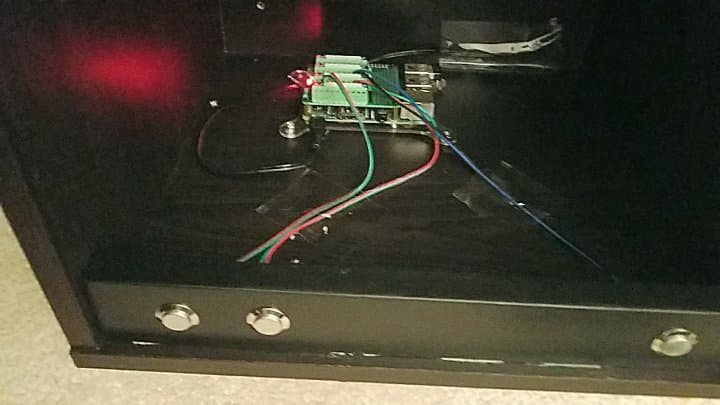 UPDATE 1: I just swapped to a Raspberry PI 3 and using the same SD card I now only get 1 of 3 button registering, then after a few presses it just stops detecting presses. Double checked to ensure that the wires are still all connected.

UPDATE 2: When swapping the hat to the RPI3, I missed an entire row of pins which caused my previous issue. I reseated it and ran the monitor and everything seems to be okay. I noticed one of my inputs however didn't fire on every button press so I switched to another (could be a pi hat issue). I'm not seeing any phantom button presses as of right now but only time will tell if changing PI's fixed it.

After swapping to a new PI I have not had this issue so I'm fairly certain this issue was caused by a faulty PI.

Not the answer you're looking for? Browse other questions tagged gpio pi-2 or ask your own question.