How to fix: rpi sd card partitions not recogized [closed]

Want to improve this question? Add details and clarify the problem by editing this post.

I am trying to clone an image that I have been working on. I have a 32G sd card. When I plug it into my pc, windows sees it as 4 different drives. There is a "Boot" drive, a "RECOVERY" drive, and then two other drives that I cannot access unless I format them. Since I can't access them, I can't read the files to an image on my pc. Has anyone had this problem or know how to fix it?

To answer your specific question: There is nothing wrong with the SDCard...

All this said, there might be tools to read ext4 formatted partitions from Windows. This stackexchange question hits at such a tool.

It should not be necessary to have the disk drive partitions mounted in order to create an image.

Seems to me that you are trying to make a backup image of your SD card, it`s very easy:

Insert your SD card in Your reader and connect it to PC.

After installing , open it, then click on the folder icon, choose the path where you want to save your image backup file and give it a name (ie. sdbackup.img), chose the correct drive letter of your SD card then click on "read". 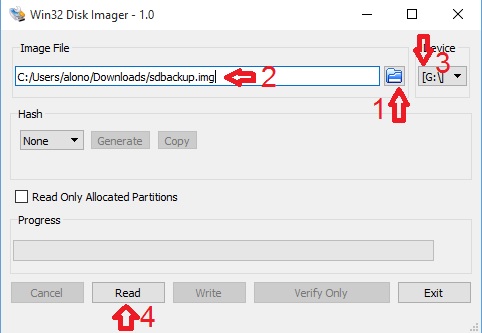 After a while you will have you SD backup image, it will have the same size of your SD card and normally it can be restored to another same size SD card. If you want to shrink it and prepare it to be restored to a smaller SD card I have a post Here with the instructions.

Not the answer you're looking for? Browse other questions tagged sd-card partition or ask your own question.

3
Raspberry Pi not booting at all with most images, but with some it does
7
How can a read-only SD card get corrupted repeatedly?
0
Trouble cloning an SD card with Recovery partition, so that it boots
1
How to read/write directly to SD card, using Windows 8?
3
Raspberry breaks SD card -> 31 MB RAW
1
Problems formatting a micro SDHC card
1
How does any file system REALLY work on a Raspberry Pi SD card?
1
RPI3 does not boot, after which SD card is no longer usable
1
How to edit Raspberry Pi files from SD card on Windows machine?