Is it possible that an SD is broken and I can not make an image out of it?

I'm trying to make a system image for a backup of my rpi3 microSD, but when I try to restore it do not works. First method I've tried is dd on Linux with this well known commands:

I've tested 2 different microSD card and with both I got Kernel Panic.

When I open Win32 disk manager I can see 3 partitions (D:\, E:\ and F:) but I've made the image file out of the first partition D:\ and seems that the program create an image file that contains only one partition not the other 2. How can I make the image of the whole SD and not of a single partition?

Third method I've tried is using Clonezilla. With this method I have no errors, the rpi is working, because I'm able to access it via web but I can only see a flashing underscore (top left corner) on a completely black screen.

To add more confusion to my situation I've made a last try:

installed a system on a microSD

copied a file on the desktop

make an image of the microSD with Win32di

restored on another microSD

I think that the problem is the microSD where actually is installed the system that I want to back up. The system is working perfectly, is It possible that ther's something wrong with that microSD and I'm not able to create a working image?

UPDATE: This the fdisk of the microSD I want to backup

You can find a very detailed guide here and here.

In case your OS is Raspbian, I'm wondering why you just don't use the built-in copier? 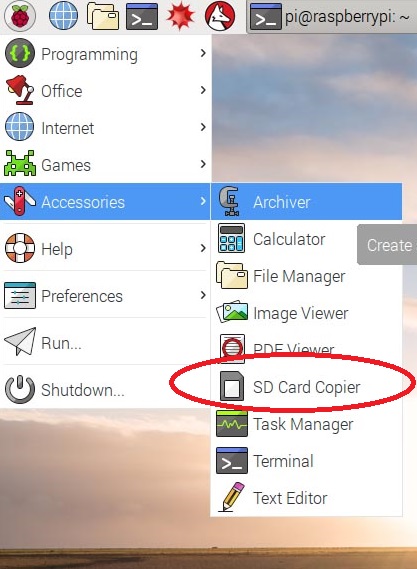 Not the answer you're looking for? Browse other questions tagged backup win32diskimager or ask your own question.

0
How to do a minimal size backup after expand_rootfs under Windows?
2
Can I perform a total backup of my system on an image file?
3
How to restore SD card backup?
1
How to restore SD backup
1
Is possible to make the backup and the recovery root partition from one to the other?
1
Backup of SD image on Mac could not be written back to same-size SD: too large
0
Backup Raspberry Partition Layout?
1
Periodic backup of Rpi3 Stretch SD card
2
Determining correct image size for Raspbian backup to fit only real data on rootfs
0
Unable to clone old sd on new one (same size) with win32 disk imager