To my /boot/config.txt on Raspberry Pi Model B I added:

Right now nothing happens when i shorten GPIO#3 with ground.

What else needs to be done to make this overlay work: software- and/or hardware-wise?

The "documentation" for gpio-shutdown is

I have used gpio-shutdown to implement a shutdown button (although I use GPIO5 - pin 29 as I use the default for I²C).

The "documentation" does not explain what happens in another pin is used - it does state "This overlay only handles shutdown".

Pin 5 USED to perform a restart on older Pi - See Will pulling pin 5 low will make the pi boot up again but this does not seem to work.

Update Pin 5 WILL restart; gpio-poweroff had disabled it.

Indeed there seems to be little point in modern 40 pin Pi - which have a dedicated Run input which can be used to restart the Pi.

PS If you are using the default ,active_low=1,gpio_pull=up seems unnecessary as there is an external pullup, and active_low is the default.

Go to this link and search for 'gpio-shutdown', it will give you steps to implement the gpio shutdown: https://www.stderr.nl/Blog/Hardware/RaspberryPi/PowerButton.html

I do not know what version of the firmware you are using, but for any current version on the RPi 3B, or RPi 4B this two-step procedure by @MatthijsKooijman still works. It may also work on other versions, but I've not tested it.

In other words: It seems that you have made an error somewhere, or your configuration has been altered. Follow the detailed procedure below, incl. the verification. If it doesn't work, please post the following information:

Step 1: add one line to /boot/config.txt:

Note that gpio_pin 3 is physical pin 5 - the SCL line for the default I2C bus - I2C1. If you're using I2C (if it's enabled), that is OK - you only need to avoid I2C1 in your configuration. For example, I use I2C for my Real Time Clock (RTC), which by default uses I2C1. Consequently, I moved the RTC to I2C0 before verifying this answer.

Step 2: Connect a momentary pushbutton switch between physical pin 5 and GND on the RPi:

Shutdown the RPi, and remove power (pull the plug) before making the wiring connections shown below. Two wires and a momentary PB switch are all that's required. 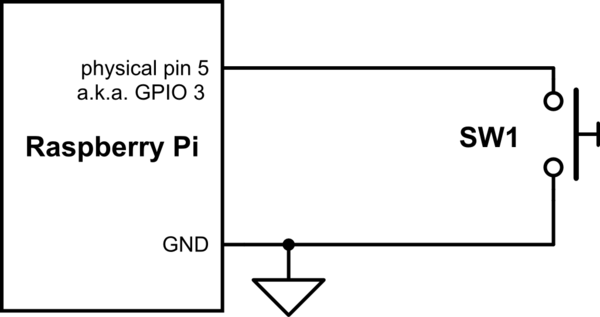 Re-apply power to the RPi, and verify that it starts and responds normally (as it did before making the changes in Steps 1 & 2). Login to the RPi via SSH.

The RPi should have shutdown "safely". Note the voltage and current to the RPi afterwards. On my RPi 4B system: Vin = 5.06V & Iin = 270mA. Verify that the SSH session you started has closed with a message similar to: Connection to raspberrypi4b.local closed by remote host.

The RPi should re-start. Verify this by initiating another SSH session to the RPi and/or by observing the voltage & current input resume normal/running levels.

The RPi 4 has a "low-power mode" configuration that may be set in the EEPROM bootloader configuration using parameters WAKE_ON_GPIO=0 & POWER_OFF_ON_HALT=1. When this configuration is set, and with the RPi 4 running, a press & release of SW1 will shutdown the system, placing it in "low power mode". However, the RPi 4 can only be re-started by cycling power or toggling the GLOBAL-EN node; i.e. connect GLOBAL_EN to ground & then release. This behavior verified on the following RPi 4B firmware image: Thu 29 Apr 16:11:25 UTC 2021 (1619712685)

The configuration parameters for RPi are in flux, and it is a given that they will remain in flux. While this answer was valid when submitted, conditions will change at some point. Please consult /boot/overlays/README on your system to verify the instructions remain essentially unchanged from this baseline version

It's been a while since the question, and @Seamus gave a good answer, but I had the same issue and nothing in the other answers worked for me.

I was using Pin 3 for shutdown and Pin 2 for gpio default on as a power indicator, both configured as:

in /boot/config.txt . Pin 3 was not shutting it down and Pin 2 was not lighting the LED.

Above that in the same file is

(this was the default config for me.)

Commenting out those two lines

fixed it for me. I assume this is because pins 2 and 3 are used for I2C and that was somehow taking priority? (Someone please feel free to fill me in in the comments.)

Not the answer you're looking for? Browse other questions tagged pi-3 gpio shutdown or ask your own question.

6
Will pulling pin 5 low will make the pi boot up again
6
Starting Pi 4 with global_en
5
What is the minimum power required for an RPi 4 in `halt` or `shutdown`?
2
Raspberry PI automatically turning on after I put it to sleep using GPIO
2
Upon shutdown of the pi, don't turn off the display until the very last moment?
1
How to make Raspian Buster shutdown when I unplug the ethernet cable
2
Unable to work around Raspberry PI 4/4GB USB issue
0
Two unrelated GPIO scripts interfere with each other
0
raspberry pi 4b, GPIO_shutdown not working at all
0
Connecting pins from multiple pi's
See more linked questions

4
Ds18b20 not detected
1
Raspberry Pi 3B refusing to shut down
0
How to install WaveShare 4-inch LCD in Raspberry Pi 3
1
Control GPIO first thing on boot-up and last thing on shutdown
0
gpio-shutdown doesn't seem to have an effect
0
Unable to power on Raspberry Pi 400 by shorting GPIO pins 5 and 6 (WAKE_ON_GPIO)
0
raspberry pi 4b, GPIO_shutdown not working at all