This is a similar question to How to turn off the CSI, and turn it back on again, but I'm actually trying to implement the suggestions that were given in that post.

I use the WaveShare RPi IR-CUT Camera which comes with two Infrared LED Boards (B).

The LED Boards are directly powered by the camera and there is no way to turn them off. Despite installing heatsinks, the boards/heatsinks get so hot that you cannot touch them anymore.

I'm really new to electronics stuff (I've been using Pis for a few years but only for coding) but I tried to build a circuit according to the following schematic, using a transistor switch with the base connected to a GPIO pin. 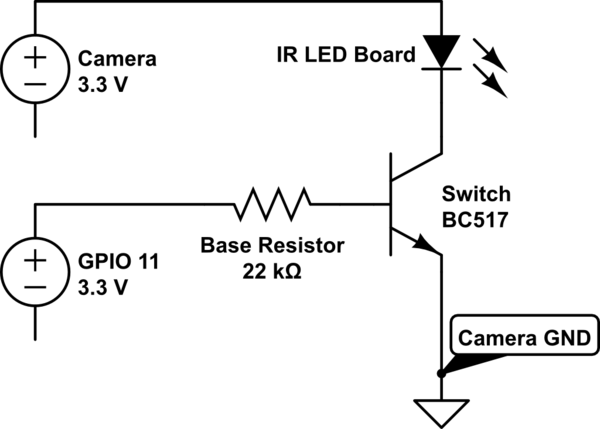 I tried to use a BC517 transistor because of the high gain and high current. I tried various base resistors between 22k and 1k ohm. However, the LED never turned on after setting the GPIO pin to high.

Any suggestions? Like I said I'm really new to electronics, so even some tips on how to actually figure out what kind of base resistor I need would be really helpful. From what I've read online it depends on the "load resistance". There are no data sheets available for the IR boards, even the WaveShare support could not provide them. All I know is that the LEDs are 3W and that the camera outputs 3.3V. With that limited knowledge I then tried to calculate/measure the load resistance, but my results suggested using a 22k resistor which did not work.

This is much more of an electrical engineering question then a pi question. But you don't need to be using a Darlington pair transistor. You are just switching a small load, which means you are using the transistor in saturation, unlike an amplifier which is what the Darlington pair is normally used for.

1k should be fine for the base resistor, and the circuit is right (make sure the grounds are the same as in the comments) but I would switch out the transistor for a different one Look here

Also take a look at the voltage drop between collector and emitter for whatever transistor you use, because you are only working with 3.3V, if it has a drop of 0.7V the camera is probably not going to be happy.

I stole this explanation from here:

Back on Darlington voltages -

Yes, in your post just preceding. That is because of the Darlington pair, for the reason I just described. I would not describe it, however, as "taking voltage away from the device I was switching". Instead, I would say that the (effective) on-resistance simply is not very low. It does, however, provide less voltage drop across the load.

FYI: I use a IRLZ34N without resistor. Works so far. GPIO is connected directly to Pin1 (left), Pin2 (middle) to LED GND and Pin3 (right) to Camera-Board GND. Very nice, because now i can control IR-Filter and IR-LED trough GPIO.

Not the answer you're looking for? Browse other questions tagged camera led electronics or ask your own question.

8
How to turn off the CSI, and turn it back on again

1
Simple solenoid valve control troubleshooting
1
Raspberry PI + DS1820 + Led. Resistor confusion (series or parallel?)
8
How to turn off the CSI, and turn it back on again
0
How to choose appropriate transistor and resistor values for the 4 digit display?
0
Use a single GPIO pin to activate both LED and buzzer
0
help reconstructing blinking LED circuit that required GPIO #17 pin low rather than high
8
Calculating resistor value for transistor
1
DIY power indicator LED stays half-on when system is off; shared GPIO conflict?